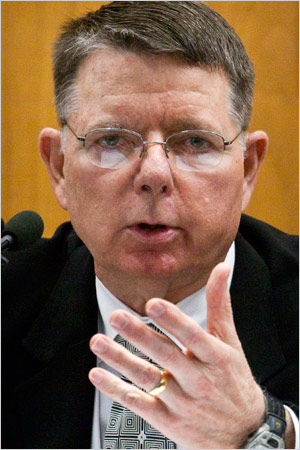 This is bad. Horrible. The Wichita Eagle is reporting. CMR offers prayers to the family. We also pray that the person who did this wasn’t acting in the name of the unborn because this would certainly set back the pro-life cause terribly:

George Tiller, the Wichita doctor who became a national lightning rod in the debate over abortion, was shot to death this morning as he walked into church services.

Tiller, 67, was shot just after 10 a.m. at Reformation Lutheran Church at 7601 E. 13th, where he was a member of the congregation. Witnesses and a police source confirmed Tiller was the victim.

No information has been released about whether a suspect is in custody.

Tiller has long been a focal point of protest by abortion opponents because his clinic, Women’s Health Care Services at 5701 E. Kellogg, is one of the few in the country where late-term abortions are performed.

Protesters blockaded Tiller’s clinic during Operation Rescue’s “Summer of Mercy” protests during the summer of 1991, and Tiller was shot by Rachelle Shannon at his clinic in 1993.

Tiller was wounded in both arms, and Shannon remains in prison for the shooting.

Tiller’s clinic was severely vandalized earlier this month. According to the Associated Press, his lawyer said wires to security cameras and outdoor lights were cut and that the vandals also cut through the roof and plugged the buildings’ downspouts. Rain poured through the roof and caused thousands of dollars of damage in the clinic. Tiller reportedly asked the FBI to investigate the incident.

Sgt. Bart Brunscheen of the Wichita Police Department said there has been no activitiy today at Tiller’s clinic, although security crews were being brought in to make sure the building was secure. Officials also were going to check the clinic’s security cameras to see if there was any activity over night.

Tiller and his clinic have faced continuous threats and lawsuits. A Wichita jury ruled in March that he was not guilty of illegal abortion on 19 criminal charges he faced for allegedly violating a state law requiring an “independent” second physician’s concurring opinion before performing later term abortions. Immediately following the ruling in this criminal case, the Kansas State Board of Healing Arts made public a similar complaint against Tiller that was originally filed in December 2008. Tiller’s medical license could eventually be suspended or revoked by the board on the basis of the complaint.