I’m A Christian Get Me Out Of Here! 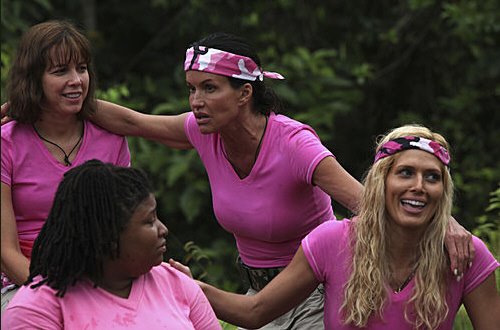 Yes, I have watched some of the train wreck that is NBC’s “I’m a Celebrity – Get Me Out of Here,” and frankly I cannot think of a greater penance than watching this show.

As a Catholic Christian watching this show, my skin has crawled so much it could have crawled all the way to the Costa Rican jungle by now.

Spencer Pratt spewing all that pretend Christian BS and then getting baptized by Steven Baldwin in the river?
Please …God …. Make ….. It…….. Stop!

Janice Dickinson, with her lies, narcissism, and manipulation is that absolute poster child for the Me Generation.

This show is so bad I actually like Sanjaya. SANJAYA!

Lou Diamond Phillips has been one of the only bright spots in the show. He has been even tempered, kind, and considerate. But then the other night he spoke about his gay friend who dies of AIDS and who led a closeted life to afraid to accept “how God made him.”
Please (weeping now) make it stop?!

Is there anything worthwhile for a Christian on this show? My answer is yes, for me anyway. One of the contestants is Patti Blagojevich, wife of the impeached Governor of Illinois Rod Blagojevich. Since the entire meltdown happened in Illinois after the release of tapes purporting to show Gov. Blagojevich selling his seat, I have made quite a few jokes at the expense of the Governor. On the show, Patti has a few times protested her husband’s innocence. While I don’t think that likely, a funny thing has happened while I have watched this show. I found out that the Blagojeviches are real people. Flesh and blood. With hurts and pains just like me. And while Rod may have done some bad things they are still people made in the image and likeness of their God. They are people trying to raise small children and trying to shield them from the chaos that surrounds them, even if it is self induced to some degree.

That is the funny thing about this show. As I watched some of the celebrities on this show try to do some quasi-Christian things I shouted at the TV, “NO, that is not what being a Christian is all about!”

But lately, as I watch Patti’s sorrow and think about her family in human terms while remembering the schadenfreude I felt some months ago as their lives fell apart I find I am now shouting at myself,”NO, that is not what being a Christian is all about!”

I learned something about being a Christian from “I’m a Celebrity, Get Me Out Of Here!” after all. Who woulda thunk it?