Dancing with the Czars 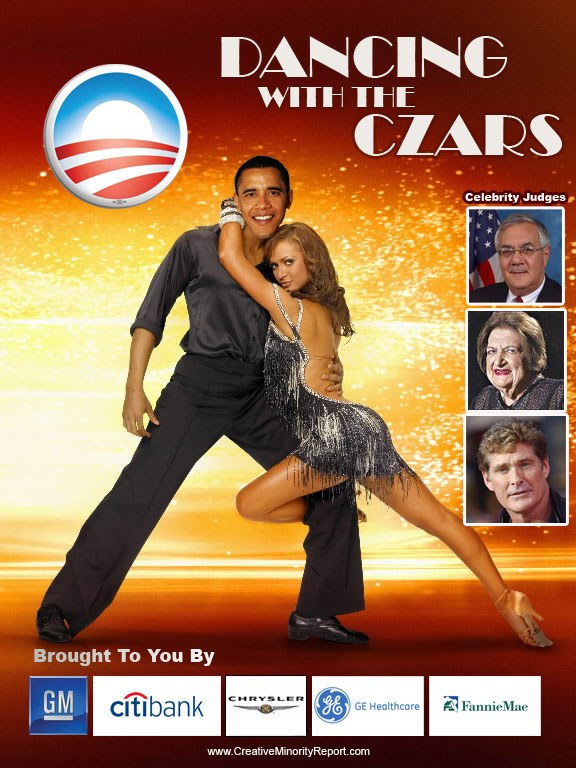 In what is sure to become a weekly viewing tradition for Americans, ABC announces its newest can’t-miss reality show starring President Obama’s 17 Czars.

Dancing with the Czars! will introduce America to a motley groups of Latinos, blacks, women, homosexuals (some still in the closet!) and even some regular old white males as they face new challenges! and new evictions! each week.

Here’s how the game works: The Czars will all live together in a 1 1/2 bathroom 4 bedroom modest brownstone in Washington D.C., where all of the players will compete for the attention and affection of Obama.

They’ll try to overcome challenges like riding a two person bicycle with Ed Begley Jr. vs. the original cast of Starsky and Hutch, and endure public humiliating background checks.

And there will be a number of cringe worthy competitions including having the Czar give a speech on a topic he/she knows nothing about in front of thousands of people when the teleprompter suddenly breaks. Whichever Czar can speak but say nothing for the longest amount of time wins.

But most of all, there will be dancing! Oh yes. All the sequins and sparkles and distractions you’ve come to love in other dancing shows are here. The Czars will each showcase their dancing skills including the Potomac two-step, the spin, the hustle, the quick step.

At the end of each episode, all the czars will stand to be judged before President Obama in the Oval Office and Obama will decide along with the panel of celebrity judges who has to leave. Obama gets 51% of the vote (because he won!) while the judges get 49% of the vote.

When Obama sends the Czars home, his catchphrase (which is sure to catch on across the nation!) will be…”This job is above your pay grade.”

Obama has decided he doesn’t like the terms “losers” so this show calls them all Runner-ups. And the runner-ups are either demoted to cabinet positions, forced to become personal aides to Barney Frank, or have to appear on Big Brother with Joe Biden.

And ever week and every competition leads us all closer to the show’s finale, when President Obama and the celebrity judges decide which Czar gets to nationalize the industry of their choice.

So all bets are off as to who will emerge from Dancing with the Czars victorious!(This show is real and none of the outcomes are decided in advance except that the winner must be a minority female.)