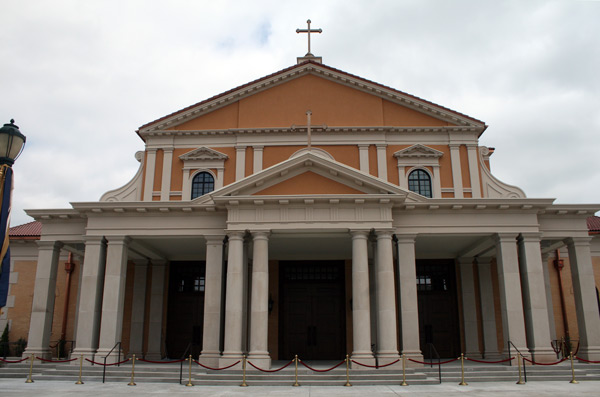 The new Church of Saint Michael the Archangel in Leawood, Kansas was dedicated by Archbishop Joseph Naumann over the weekend within the Vigil Mass for Corpus Christi . CMR readers have seen a number of posts on the church over the last few months, but here are some photos to enjoy. David Meleca, design architect.

The front facade was designed to evoke the Baroque church facades of Rome so that this parish in Kansas might assert its connection to the larger universal Church gathered in unity around the see of Peter. Materials are cast stone, brick and stucco. Interesting to note is the use of a full Doric entablature over the center entry portal and modilions (small blocks) throughout (click image for a larger view). These elaborations are costly and almost universally edited out of new classical works.
The seating of the church is grouped in a Greek cross with seating on three sides, but an attempt was made to give the sanctuary a sense of permeable enclosure. All of the sanctuary finishes are marble including the steps, flooring, altar and front face of the sanctuary’s vertical edge. The altar, composed of three types of marble with bronze fittings, was meant to harmonize as a heavenly table with the 24 foot mural on the rear showing Christ in majesty receiving the praise of angels and saints. The legs of the altar signify its “tableness,” the mensa its use as a place of sacrifice, and the enclosing panels suggest its tomb like quality recalling the catacombs of the early Church. The altar of repose in front of the mural is temporary while the marble altar is being shipped from Italy. Same for the ambo.
Beneath the figure of Christ is shown St. Michael surrounded by saints and blesseds from the Americas. (The tabernacle is still open because the dedication had not happened yet when these photos were taken.) Notice the Kansas City Power and Light Building in the background of the picture on the right.
The altar of sacrifice includes Composite capitals with bronze versions of the sword of St. Michael embedded.
The dome over the baptistery depicts the Holy Spirit coming down both as the dove and the River of the Water of Life through the starry skies of the glorified cosmos. Notice the red marbleized columns to establish the significance of the baptistery in relation to the sanctuary which has columns with a similar treatment.

Archbishop Naumann accepts the key to the church.