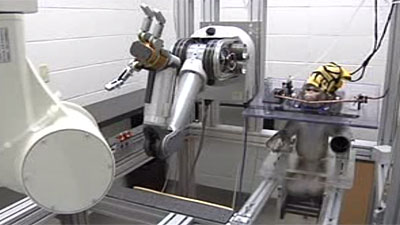 Scientists who obviously missed Charlton Heston’s Planet of the Apes just invented something which will be coming soon to a nightmare near you.Sky News reports:

A monkey fitted with a hi-tech brain chip has learned to move a complex robotic arm using mind control.

The chip implant allows the monkey to manipulate the arm by thought. The animal can operate the robot with such dexterity that it can reach out to grab, and turn a handle.

The mechanical arm has an arm, elbow, wrist and simple hand, which the monkey controls with the power of thought.

If it can grab a doorknob, removing your larynx essentially would be the same principal.

What could be more effective and potentially terrifying than spying on your enemies with robot bats? That what researchers at North Carolina State were thinking when they started working on creating robotic versions of the furry fliers. The idea is to create micro-aerial vehicles, or MAVs, that would be used for surveillance or detection of weapons.

I’ll admit. Robot bats would freak me out. But you attach those monkeys to the robotic bats, you’ve got yourself a Wicked Witch of the West type army that will pretty much win any confrontation, battle, skirmish you desire once your enemies see the screeching faces of monkey robats raining down, pulling up trees with their bionic arms, and clubbing their enemies into submission. And add to that the disgrace of your victors throwing their own fecal matter at you from miles away as a sign of their enduring dominance.

Let’s hope if any scientists put these things together, they’re our scientists.

I thought the low point of the 21st century came when Michael Jackson’s father pitched his new record label at his son’s wake. I was wrong. And not just a little wrong. Epically wrong.
AllNewsWeb reports:

Angelina Ramos, aged 38, a beautician and Manila native has been a serious Jackson fan ‘all her life’. Last year never-married Angelina contracted a rare blood disease. Doctors gave her a ninety percent chance of not surviving for more than a year.

(Firstly, if my doctor ever said a 90 percent chance of not surviving I’d shank him with his tongue depressor for saying I’m going to die in a confusing double negative manner. Now back to the story)

Angelina was shattered when her hero died. Two days after Jackson’s passing Angelina woke up at night and felt a presence in her bedroom. She sat up and felt a hand pull her back down. She looked up and she saw her hero.

(Oddly enough, this is exactly what Corey Feldman reported all those years ago. OK. Sorry. Now really back to the story.)

‘He looked radiant, at peace, absolutely beautiful. It was Michael for sure. He had a warm smile on his on his face’ said Angelina.

‘I was both stunned and at the same time uplifted’

‘He then touched my face and told me that my problems are over. He said I have nothing to worry about and that I should not be sad for him either for he has gone to a wonderful place and his pain too is now gone’.

‘The next day I went to the doctor for the usual check-up. The doctor came out and told me that my disease was in remission. He was so surprised. He said he could not undersand but I should be jumping for joy’

Well, actually the doctor said there’s a 90 percent chance that you’re not going to not die in the next few months.

Maybe we should dig him up and see if he’s corruptible. Oh wait, with all the plastic I’m not even sure he’s biodegradable.

Popular Science: Cars and devices could soon be powered by hydrogen extracted from urine

Because it’s the universe’s most abundant element, hydrogen is a good candidate for a renewable energy source. But there’s a problem: the finicky element is difficult to manage. Storing it in its pure form is a hassle that requires high pressure and low temperature, and unbinding it from paired elements used to stabilize it comes with significant secondary energy costs.

Fortunately, though, there’s urine to the rescue.

This would bring a whole new angle to the “Baby, I really just ran out of gas.” Don’t worry I’ve got a solution. Drink up.”

Rant Rave reports: Thousands upon thousands of giant squid have invaded the virginal coastal waters of San Diego. Giant squid are not completely unknown in the region, but they typically are not found in such high numbers.

Divers are avoiding the Humboldt squid, staying out of the water, hurting the local economy. Stories of tentacles reaching up out of dark waters have kept families on the shore this summer.

Experienced Mexican fishermen call the giant squid “el diablo rojo” – the red devil – and they’ve learned how to fish where the devil doesn’t roam. Humboldt squid like to hunt in packs – over a thousand pinchers, eight thousand tentacles splashing in the water – doesn’t sound like a pretty picture to me.

– They grow at a shocking rate: 7 feet and 100 pounds in one year. (Shaquille Oneal)
– They can swim at a rate of 15 miles per hour. (Michael Phelps)
– They are cannibals: they’ll eat other injured giant squid or other, little squidlings. (Jeffrey Dahmer)
– The current invasion is rumored to be related to a recent underwater earthquake.

Raise your hand if you think that the guy who notoriously bought or destroyed rivals, ripped off Apple, and who gave us Windows ME should have control over hurricanes? No? Seems like a bad idea you say? Well too late. He already patented it.

Truly this is the age of Greenfinger: Billionaire Bill Gates has patented the idea to halt hurricanes by decreasing the surface temperature of the ocean. The patent calls for a large fleet of specially equipped ships which would mix warm water from the ocean surface with colder water down below, according to five new patents that include Microsoft’s chairman as a co-inventor. That could then reduce or perhaps eliminate the heat-driven condensation which hurricanes feed upon, thus significantly reducing their intensity.

“Reducing their intensity eh? If I just flip this switch and so long Tampa! Unless of course the world gives me one billion dolla… One trillion dollars.”

Let’s face it – who would pay one trillion dollars for Tampa. A trillion for the NEA or a new highway in West Virginia – sure. But for Tampa?

Just last week we had the time 12:34:56 on 07/08/09. I missed it but probably something was birthed at that moment that will end the world…likely in 2012. At this point it is a tossup between the Shaq-O’Dahmer-Phelps squid and Al Franken. Either way….