The Moral Story of the Vampire 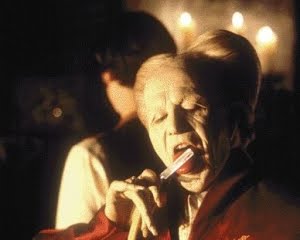 A recent article in Touchstone magazine opened my eyes to the Catholic moral story of the vampire– which is about more than movie theater titillation. Anglican vicar Robert Hart writes explaining the moral dilemma of the traditional vampire story and how this content has been left out of recent vampire tales. The vampire, as undead, is miserable. He wants eternal life, yet cannot find it. He therefore drinks human blood as an inadequate substitute for the Blood of Christ, prolonging his misery at the expense of others. He therefore serves as an anti-type of Christ, who sheds His own blood and brings life to others. Interestingly, Hart writes positively about Bram Stoker’s Dracula and its understanding of the traditional vampire motif:

Stoker based his vampire upon the genuine superstition of the mountain people of Romania. It had grown up among people who knew that evil—which will be defeated and ultimately destroyed by God and his Church—is inherently weak and unreal. It is not sexy or attractive.

Stoker’s Dracula was ugly, and his breath stank with the foul odor of undead centuries. Being in the grip of evil, he went about spreading his misery by draining the life, the soul of the flesh, which is in the blood, from his victims. The sight of him repelled everyone who suffered the misfortune to behold him. He existed only to perpetuate his unnatural—dead—life.

He is a symbol for everything that sin makes of men, and of the pure evil that ensnares them through it. In the character of Dracula, written to be as minimal as his undead state demands, nothing can be observed except that some of the Seven Deadly Sins had captured his soul. For example, he is quick to wrath so as to be thoroughly exacting in vengeance. He is very proud that he was the greatest of the nobles that his country ever produced, especially in war.

This version of the vampire story Hart compares to more recent television vampires who glamorize their bondage to sin, where the crucifix and the Blessed Sacrament hold no power over them. All in all a fascinating read. To see the whole article, click here.