First Tiger and Now This! 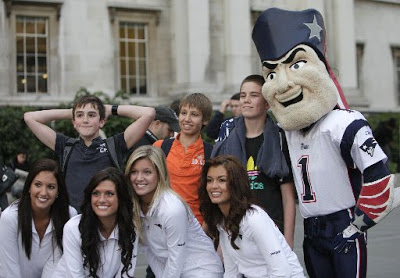 First Tiger Woods and now this. CBS is reporting that the New England Patriots mascot has been arrested for prostitution related crimes. Oh the horror!

Can the sports world take yet another hit. This is especially horrifying as New England’s reputation up to this point had been spotless, if you discount the fact that they were cheating for years before they were finally caught.

Ok. Well the guy wasn’t in the mascot uniform when he solicited the prostitute (as far as we know) but still:

A man who acts as a mascot for the New England Patriots is among 14 people who have been arrested for prostitution-related crimes in Rhode Island since a new law went into effect that banned indoor prostitution, CBS station WBZ-TV reports…

State Police say Robert Sormanti of Warwick was among those arrested in an undercover sting at a hotel. The Providence Journal reports Sormanti is among the team’s mascots.

The Patriots said in a statement that multiple people wear the mascot costume and that the “individual in question” has been suspended.

I want television specials and investigations into the seedy world of mascots. Let’s finally put truth to all the seedy rumors swirling around the grown men with no discernible talent who wear giant heads.

At least this sorry episode helps us finally put some science to the truth which we all kind of suspected. Chicks don’t dig mascots.