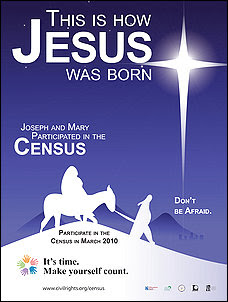 The award for most shameless use of religious imagery in an effort to garner political power goes to…well Barack Obama.

But the National Association of Latino Elected Officials comes in a close second with this stunt.

A poster showing Mary and Joseph heading to Bethlehem for a census and the birth of Jesus is raising eyebrows among some evangelicals, who consider it an inappropriate use of Christian symbolism for the headcount the government will conduct next year.

The posters, created by the National Association of Latino Elected Officials (NALEO), have been distributed to more than 7,000 churches in an effort to raise awareness of the census among Hispanics. Most were printed in Spanish.

The poster says “This is how Jesus was born, Joseph and Mary participated in the Census.” That alone is hilarious. I think the Holy Spirit had something to do with it as well. Believe it or not Jesus was not a direct result of the census. I know. I know. Something amazing happened without government intervention? Who’d a thunk it?

Believe me if the government were in charge of the savior’s birth it would’ve been all messed up and it would’ve taken like 2,000 years longer than it really did and he probably would’ve been born in Kenya or something and instead of actually healing people he would’ve just promised universal healthcare…or something.

And the wise men would’ve been climatologists. And creches would have endangered polar bears instead of sheep.

But the bottom quote on the poster really typifies liberal sentiments when it says “It’s time. Make yourself count.” Typical liberals. They think the only way you count is when government counts you. You know Herod did some counting as well. That didn’t work out too well, you know.

But overall this is just a ridiculous display of using religion to score political power. And make no mistake, this is about race-based political power. Isn’t it weird how liberals are always complaining about separating church and state and then they come out with something like this which shows they’re not against religious imagery. They’re just against your political power.

The ironic part here is that it was the government’s cruelty and insatiable hunger for taxes and power which forced Joseph and Mary from their homes. Hey, some things never change.