Is “The Book of Eli” a Christian Movie? 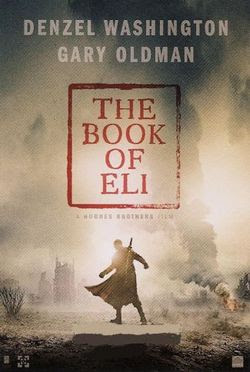 You’ve probably seen the trailer for Denzel Washington’s latest movie. It seemed to me to be your basic post-apocalyptic violence soaked actioner.

Now I love movies but I was definitely thinking this seemed like a cable movie. I like Denzel but my wife really wants to see that new romantic comedy “Leap Year” so the chances of me getting out to the movies are pretty small anyway.

But in the movie it seems Denzel is walking through a post apocalyptic wasteland and the evil Gary Oldman is intent on stopping him to get something that Denzel has. Alfred Hitchcock used to call that thing a “MacGuffin” I think. The oddity (and the reason I’m bringing it up here) is that the “MacGuffin” in this movie is The Bible.

Denzel is carrying The Bible across the country because he’s presumably been told by God to do so. Denzel believes that he must carry the Bible somewhere to redeem the country (or something) while the evil villains want to get it pervert it for their own reasons.

I don’t know much more about the movie but Kyle Smith writes:

Hollywood’s Christian blockbuster is finally here. Remember how, after “The Passion of the Christ,” Hollywood was going to get wise and make some big mainstream movies that acknowledged the Christianity of a majority of this country? Didn’t happen. Until now. “The Book of Eli” is not only a well-done action picture but an overtly, unabashedly Christian one in which Denzel Washington plays a soldier of God. He’s on a divinely-inspired quest — yes, a literal mission from God — to take The Book to the West as a swarm of wrongdoers led by Gary Oldman try to stop him.

In a post-apocalyptic wasteland (the movie hedges its bets on the usual war-or-environment question: this time, both have occurred), an unidentified man known as the Walker (a badass Denzel) strolls through the nightmare defending himself and slaying vicious predators who try to rob him along the way. The one semi-organized remnant of humanity is led by a Mussolini-loving leader (Gary Oldman) who is introduced reading a copy of a bio of Il Duce. Oldman has sent his gangs out looking for a copy of a specific book, although his men are dunces and can’t read.

They come back with whatever books they can scrounge up — including, hilariously, a copy of “The Da Vinci Code” (the movie is landing a little jab on the Dan Brown book’s message) but not The Book.
Because the only copy left of the Bible is the one Denzel is determined to carry to the West, having heard the voice of God commanding him to do so. Moreover, the Walker seems to be divinely protected: In a shootout, every bullet seems to whiz past him. Even the heavy villains have started to notice the aura of untouchability about him, and they find it unnerving.

The Oldman character wants The Book because he’s convinced its words will enable him to control the world, not just the dirtbag town he oversees.

Now the Hughes brothers seem to be running away from the Christian angle of the movie but the idea of a guy promulgating religion with a sword disturbs me a bit. But I’ve got to admit the fact that the movie deals with Christianity has got me at least a little more interested in checking it out.

I’m interested in your thoughts or anything you’ve heard.