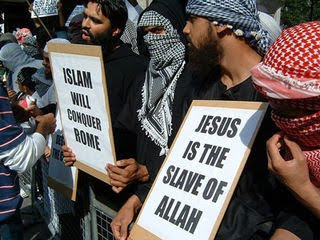 Weasel Zippers has a disturbing story about Muslims enforcing Sharia Law in prison and click the link to read about what happened to an imprisoned Catholic who wouldn’t convert:

(Telegraph)- Radical Muslim gangs are imposing a form of sharia law inside some of Britain’s prisons, a BBC investigation has found.

Non-Muslim inmates at the high-security Long Lartin jail have been forced by the gangs to stop playing “Western” music and take down pictures of women from their cells, according to one former prison officer there. Prisoners at the jail, although allowed to cook their own food, are not allowed to prepare pork for fear of offending the Muslim inmates, the officer said.

The officer, speaking to Radio Five Live’s Donal Macintyre show, told how younger prisoners were targeted for forced conversion to Islam by the gangs. “They went along because they were intimidated. They genuinely weren’t of the Muslim faith,” she said. “I knew one lad quite well, who was approached by the radical Muslims and he changed. He was being controlled and bossed around and he wasn’t even allowed to look at me or speak to me.

Check out Weasel Zippers for the rest of the story.