How Many People Do You Have to Kill? 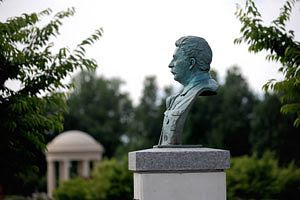 Winston Churchill, Harry Truman and Franklin Roosevelt are great men who are honored with busts at the D-Day Memorial in Virginia. But guess who else just got a bust? Josef Freakin Stalin.

Sheesh. How many people do you have to murder before not being honored? Seriously.

The leader of the former Soviet Union arguably made a run at being the worst person in the history of mankind. If he didn’t win he at least placed.

The artist, a college professor (shock!) seems like he’s attempting to argue that while he’s personally opposed to Stalin, leaving him out of a D-Day memorial wouldn’t be right.

“He was just a terrible person,” said Pumphrey. “So the challenge is to embody the terror he instilled.”…

He compared leaving Stalin out of the lineup of Allied leaders with not including Judas, the betrayer of Jesus Christ, in “The Last Supper” — a famous painting by Leonardo Da Vinci.

“He’s part of the narrative,” said Pumphrey. “We may not like Stalin, but if he had not challenged Hitler on the Eastern Front, then victories on the Western Front may not have been possible.”

This seems like a bit of a tenuous connection to D-Day itself, doesn’t it?

You can tell a lot about a people by the history they choose to ignore. They say those ignorant of history are doomed to repeat it. Well it’s those who change history who are actively engaged in the dooming.

But this is what you get with the absence of values in our culture. Stalin right next to FDR. How do these people not understand that a National D-Day Memorial is about honoring the memory of men who put their lives on the line for a good cause.

William McIntosh, the memorial foundation’s president, would not name the donor for the Stalin bust but he admitted it was an individual. All he said in news reports was: “We don’t do anything until we have the money in hand,” he said. “It’s money that came from a designated place that has a certain purpose.”

Why not a bust of Hitler considering he also played a role in D-Day. That would be crazy though, right? Why you might ask. BECAUSE HITLER IS A BAD GUY. JUST LIKE STALIN!!!!

Our country’s heading down a weird road when twenty years after the cold war a bust of Churchill gets shipped back to England and Stalin gets a bust.