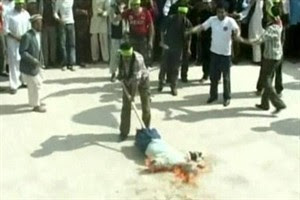 Wanted: A new effigy maker. May have to be willing to relocate to “dangerous” country where Christians are beheaded pretty regularly. Not a lot of pay but good job satisfaction if you’re a “Death to the West” type.

But if you’re a fan of the flammable arts, boy does Islam have a job for you.

I’m putting out this ad for an effigy maker as a way of reaching out to my Muslim brethren because the people in Afghanistan obviously need help with their effigies. A lot of help.

Today, adherents to the religion of peace reportedly burned the Pope in effigy in Afghanistan. But it’s kind of embarrassing because I’m pretty sure they had to tell reporters who they were burning because there’s absolutely no way to tell that they were burning a likeness of Pope Benedict.

That flammable figure looks as much like Jon Bon Jovi in jorts as Pope Benedict XVI. All they could get from the press was this vague nugget: “The protesters, who were mostly college students, also burned a stuffed figure in western dress, reportedly an effigy of the Pope.”

Reportedly. Ha! Nobody could tell.

The Afghani Muslims simply have to find themselves a new effigy maker. Come on Afghanis, you send people over to America to learn how to make bombs only to return to Afghanistan with their mad bomb making skills. I think it’s time to send someone over here to art school or something and then go back there to make effigies that actually look a little like the person you’re so angry with. Even a weak resemblance would be fine.

But, why, you might ask are they so angry with the Pope? It would appear that these Muslims are growing a bit tired (like jihad kinda’ tired) of seeing their friends and neighbors converting to Christianity. Poor things.

Weasel Zippers has the money quote:<

“We want those who have converted from Islam to be punished. We also want the Islamic Republic of Afghanistan to ban all the churches that have been established and any organisation spreading Christianity here,” said one protester, Zabiullah Khan.

Pope Benedict hasn’t cowered in fear from the threats of Islam and he never will. Thank God for Pope Benedict.

So since Pope Benedict isn’t going to stop spreading Christianity maybe the Afghanis should apply for a grant from the National Endowment for the Arts. They love funding anti-Christian art.