Transsexuals in the Military? 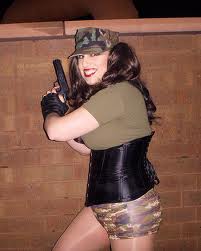 With the Don’t Ask/Don’t Tell policy becoming a thing of the past, transsexuals are wondering when it’s going to be their turn. I’m wondering the same thing.

Before handcuffing herself to the White House fence, former Petty Officer First Class Autumn Sandeen carefully pinned three rows of Navy ribbons to her chest. Her regulation dress blue skirt, fitted jacket, hat and black pumps were new — fitting for a woman who spent two decades serving her country as a man.

Sandeen was the only transgender person among the six veterans arrested in April while protesting the military’s ban on openly gay troops. But when she watched President Barack Obama last month sign the hard-fought bill allowing for the ban’s repeal, melancholy tinged her satisfaction.

I’m honestly not sure how you’d say no to them. If you can’t say no to homosexuals what criterion would be used to keep out transsexuals?

There would be advantages though to having a transsexual unit. Think of the terror that would be inspired by a horde of Cher-like transsexuals charging a hill in their black pumps and lycro camo bras while screaming like Xena the Warrior Princess.
I’d run from that.