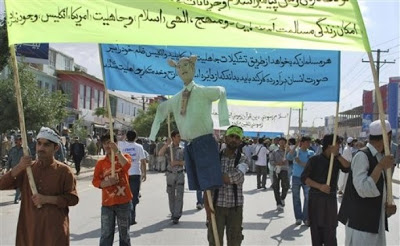 The Islamists yesterday were so upset that Pope Benedict XVI had the gall to criticize them for killing Christians that they burned the Pope in effigy, according to Weasel Zippers. At least we think it was the Pope. That’s what they’re saying but looking at some recent pics of some good ol’ fashioned effigy burning and you’ll see it’s difficult to tell.

OK. This has got to stop. Somebody in the Muslim world needs to step up and procure some skillz at effigy making.

And now that Bush is gone let’s face it, they only have one guy to burn in effigy and that’s Pope Benedict. So why can’t they make a flammable likeness of Pope Benedict? I mean, is it that hard? Do they not have paper mache in the third world?

Something tells me that if they don’t improve in their effigy making it won’t be for lack of burning the Pope’s likeness. Because sometimes it seems that he’s the only one willing to speak the truth and they know it.