Gymnast Refuses to Compete on Sabbath 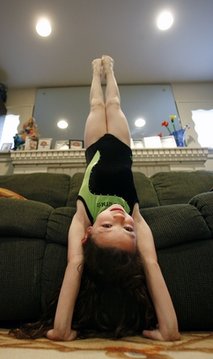 This is good to see. It’s a little like Chariots of Fire. But with second graders. And gymnasts rather than runners. But other than that it’s kinda’ the same.

Although she would have ranked fifth in her age group, eligible for a medal, her individual scores were discounted. She was unable to compete on a Saturday because of her Orthodox Jewish family’s observance of the Sabbath.

“I was upset,” Amalya said, “but my mother told me there are decisions you have to make.”

USA Gymnastics made an effort to accommodate her and let her compete the next day, Sunday, Feb. 13, and permitted her scores to factor into her team’s overall rankings.

But the national governing body held that because she hadn’t competed at the same time as girls of her skill level and age group, her scores: 9.7 on vault, 9.575 floor, 9.5 beam and 8.75 bars — would not count toward individual medals or rankings.

I’d expect that as our culture becomes increasingly secular, clashes between those of faith and the mainstream culture will become increasingly frequent. Case in point, the wrestler who refused to wrestle a girl due to his religious beliefs.

Good to see some people still standing up for their beliefs. The kid seems to have her priorities where they should be. Good for her. Seems like a good family.