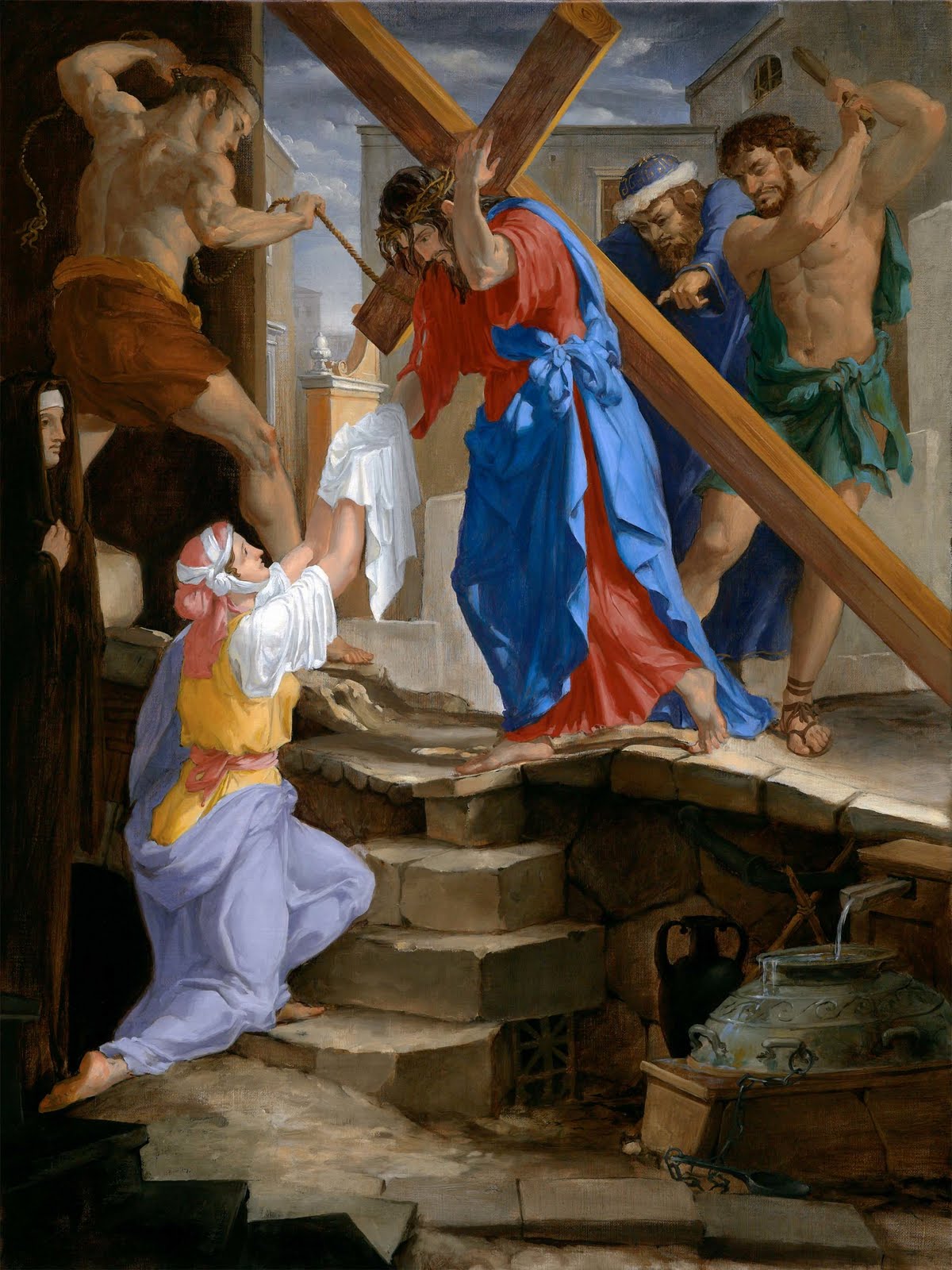 Station 6 shows Veronica wiping the face of Jesus, and Porter intended this station to be a “flexion point” in the progress along the via crucis. Keeping the three great epochs of salvation history in mind—the time of shadow (Old Testament), the time of reality (the end of time) and the time of the image (our current time)—here we see Christ reaching across from one epoch to the other, from shadow to image.

Accordingly, the painting centers on themes of image, threshold and reaching across boundaries. Fundamental to the scene is Christ giving the image of his face to Veronica in the famous Veronica’s veil. Just as Christ’s own image came from heaven to earth in the Incarnation, so his images is given to Veronica across an implied threshold in the scene itself. Christ stands up high in a brightly-lit right side of the painting, reaching across and down to the darker left side. Interesting to note is the two-way exchange evident here. Veronica gives her veil to wipe the face of Christ, yet what she receives back is transfigured and glorified: a veil made more like Christ just as humans would be made more like Christ by being restored to divine life in his image.

In further allusion, Porter associates the wiping and cleansing of Christ’s face as analogous to baptism, a sacrament of purification of the one who offers him or herself to Christ. To this end, Porter included a small fountain in the lower right, a small pipe from Christ’s side of the painting, flowing with water into a jar which then flows over into the world. The water represents the heavenly bliss of grace, freely flowing from heaven to earth. Note too that the pipe is held up by two small wooden sticks forming a cross, derived from the small cross often held by John the Baptist in traditional paintings. An image of John, who led others to literal baptism, here supports the free flow of the waters of grace.

A column-like woman in deep shadow witnesses Christ’s action at the left side of the painting. Porter thought it important to have many witnesses in the stations, not only to coincide with the biblical descriptions, but to indicate the nature of a Christian community which sees and is inspired by other members of the Mystical Body. A small orange wall in the background supports a decorative finial in the shape of an acorn, a reference to the tree, both the tree that caused the fall of Adam and Eve and the Tree of Life which is the cross. Images of piercedness occur here as well in the small grate under the steps upon which Veronica kneels and the arch behind her feet.