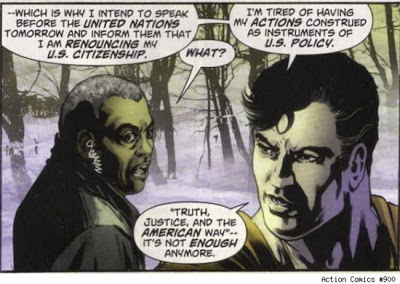 Today I found out Obama actually is an American and that Superman isn’t. Chalk it up as a bad bad day.

Weasel Zippers has the story but essentially it’s a bunch of leftist anti-American idiot comic book writers playing out their own political fantasy and looking for publicity. In short, they’re idiots.

Oh wait. Couldn’t we blame Obama for this? Obama became President and halfway into his term he’s even driven Superman out of the country with pictures like this one.

Jim Treacher writes that this may just prove Supes is racist.

We all know what this is really about. It’d be one thing if Superman renounced his U.S. citizenship under The Evil George Bush. But we put a black man in charge, and all of a sudden the Man of Steel heads for the exits? Nice try, Kracker-El. You might as well trade in that red cape for a white hood and join the Kryptonian Klux Klan.