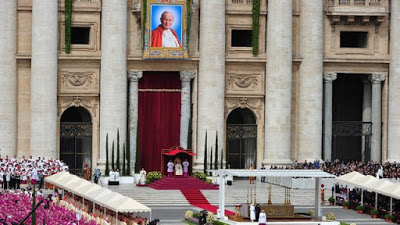 More than one million people have attended a special mass in St Peter’s Square in Rome to mark the formal beatification of Pope John Paul II.

‘From now on Pope John Paul shall be called ‘blessed”, Pope Benedict XVI proclaimed in Latin.

To the cheers of the huge crowd, a tapestry showing a smiling John Paul was unveiled seconds after Benedict read the proclamation. A vial of his blood was presented for veneration.

The move is just one step short of full sainthood for the Polish Pontiff who died on 2 April 2005.

Supporters of a candidate for sainthood normally have to wait five years before any evidence is even considered.

However, the pressure for John Paul II to be canonised began almost immediately after his funeral.

The evidence is centred around a French nun who was apparently cured of Parkinson’s disease having prayed to the Pope soon after his death.

Doctors have confirmed her recovery and are unable to offer an explanation.