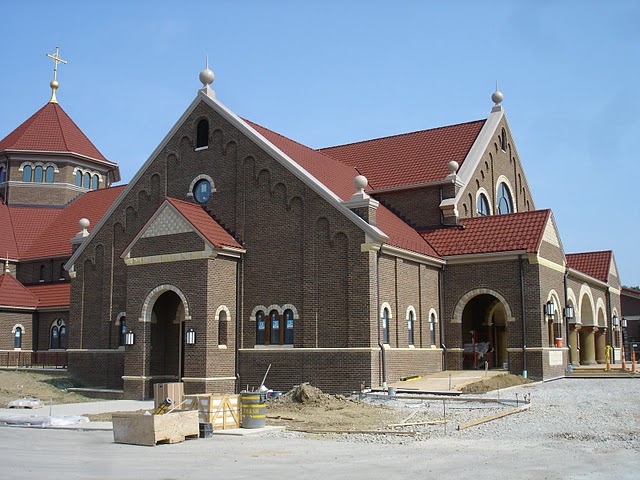 Last week I posted an introduction to the new St. Paul the Apostle Catholic church in Westerville, Ohio, just outside of Columbus. Its architect, David Meleca, has designed a number of classical and traditional churches over the last decade, and recently posted some new pictures on his blog. The church draws from several Romanesque traditions: Italian, German and the Richardsonian Romanesque.
One of the fine features of this church is its consistency of design, with furnishings designed and/or supervised by the architecture firm for quality control. This post will show the fine level of design and craft in the church’s baptistery. ﻿﻿﻿﻿﻿﻿﻿﻿﻿﻿﻿﻿﻿ ﻿﻿﻿﻿﻿ ﻿ ﻿ ﻿﻿
﻿﻿﻿﻿﻿﻿﻿﻿﻿﻿﻿﻿﻿﻿﻿﻿﻿﻿﻿﻿﻿﻿﻿﻿﻿﻿﻿﻿﻿﻿﻿﻿﻿﻿﻿﻿﻿﻿﻿﻿﻿﻿﻿﻿At St. Paul’s, the parish opted for an immersion baptistery with a more traditional font incorporated. The font (made of the same stone as the altar) allows for infant baptisms and serves as the primary holy water source for those entering the church. Some discussion was had over whether the water should flow from one section to the other. Some wanted moving water, while others thought the sound a waterfall would be distracting. The solution: a piece of carved marble comes down from the font, down which water could flow, but would meet the water in the font below in silence.
﻿We’ve all seen immersion baptisteries that garner the name “Father’s jacuzzi” or look like something straight out of the local shopping mall, fundamentally composed of marble slabs and houseplants. Often theological considerations are not raised at all in baptistery design.
Since a person is baptized in the name of the persons of the Trinity, a Trinitarian motif was chosen for the bottom of the large portion of the font. Though there are many symbols that could have been used, the church decided to use the oldest known image of the Trinity, one of three intersecting fish as the central motif. The mosaic was fabricated Columbus artist Amber Apel and successfully maintained a vigorous Early Christian feel in newly-made work.﻿﻿﻿﻿﻿﻿﻿﻿﻿﻿﻿﻿﻿ Note the gradation of blue from dark to light and he wave pattern around the edge. This is truly great work and proof that craftsmanship is still alive and well in our churches.
Moreover, a grey marble was chosen for the wave patterns in the bottom of the pool which contains fossils of sea creatures, shown at below. Called, appropriately enough, fossiliferous marble, the stone will not only appear dignified, but will indicate that the past comes to the present in praising God. Just as the psalms say “all water creatures bless the Lord,” so this marble will be silent testimony of creation being brought to its liturgical end in the praise of God.
More to come on this new church.

Dr. Denis McNamara is faculty member and assistant director at the Liturgical Institute in Mundelein, IL.