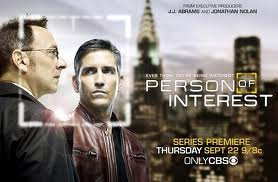 Jim Caviezel’s new show from producers JJ Abrams and Jonathan Nolan got off to a good start. One awesome thing I meant to share earlier was that I was watching EWTN’s “The World Over” last Thursday and at the end of the show host Raymond Arroyo told his audience at EWTN to go watch Caviezel’s new show on CBS. That’s pretty awesome. I mean, what other network on television would tell people to go watch another network?

But I watched it and it was a good show with a lot of cool possibilities. Caviezel plays a former spy who is approached by a mysterious billionaire played by Michael Emerson of LOST fame (guy still creeps me out) to go all vigilante on crime and protect people.

Blogging buddy Jen Raiche asked me recently what value as a Catholic does the show bring. I’m not sure how Catholicy the show is but hey, it’s about defending the innocent or at least the innocent-er. And I trust Caviezel to deliver an inspiring performance rather than anything degrading.

Hey, I noticed that Caviezel’s character tends to knock people out with the handle of his gun rather than shooting them and when he does shoot them he tends to shoot a lot of people in the leg. So right there I think that’s a good Catholic motto. If you need to incapacitate bad guys try smashing the handle of your gun somewhere on the back of their head or neck region (I can’t tell which) but if your sneaking up skills are poor and you’re forced to shoot someone, shoot them in the leg. I don’t think these rules will ever be codified into a commandment or anything but it’s a good rule of thumb. Head smash first, shoot later. Of course, the shooting in the leg rule is bendable if you’re not a very good shot or you don’t have a lot of bullets. But at least in the show Caviezel’s got mad gun skills so it works for him.

I don’t think the Catechism says anything about silencers so you’re on your own there.

Anyway, the show looks pretty cool and it started off with decent but not great ratings so I want to support Caviezel. I’ll be watching.

Did you watch it? What do you think?