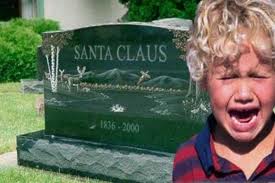 A gang of adherents to the religion of peace have killed Santa Claus. Word has it they’re next to target elves and magical reindeer.

The Voice of Russia reports:

In Dushanbe, a young man, dressed as Santa Claus, was killed by a mob of young people, shouting accusations of “infidel,” as a senior source in the Tajik Interior Ministry disclosed.

“The young man had decided to congratulate his relatives dressed up in a Santa Claus outfit. When he approached the door of his house, he was attacked by a mob of about 30 young people, shouting, “Tu kofiri” (“Infidel”), who inflicted on Parviz numerous stab wounds from which he died in the hospital,” – said the source…

On New Year’s Eve, December 30, the head of the Ulema Council of Tajikistan Saidmukarram Abdukodirzoda told reporters that decoration of Christmas trees, dancing and games around it are alien to the Tajik culture and contrary to the laws of Islam.

Authorities in Dushanbe are denying that the murder was motivated by religion although they admitted that the people who were tearing Santa apart were yelling “infidel” at him.

Authorities are regarding the murder as a “domestic crime” but CMR suggests otherwise. Feel free to draw your own conclusions.