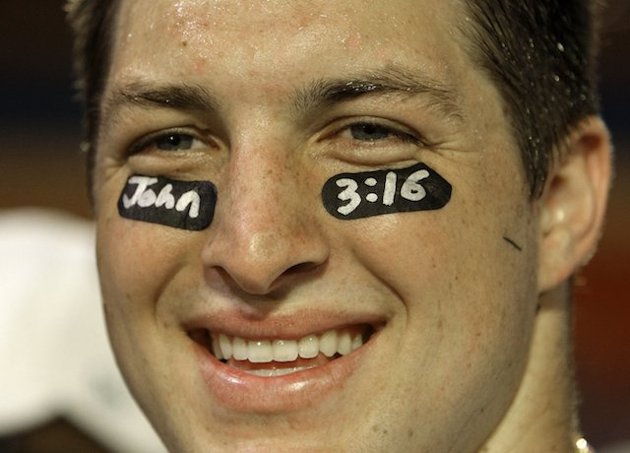 This is probably one of the iconic pictures of Tim Tebow, who rocked the John 3:16 tape under his eyes in the BCS Championship game. Since then, he’s become associated with that Bible passage.

Now get this, from Yahoo:

The fact that Tebow had 316 yards passing and averaged 31.6 yards per pass in the game didn’t escape notice on Sunday night. Tebow wore “John 3:16” on his eye black in the 2009 BCS Championship game and has since become identified with the famous Bible message. The coincidental stats caused millions of fans to perform Google searches on the Bible passage in the past 24 hours. Here’s one more unbelievable stat: John Ourand of Sports Business Journal reports that the final quarter-hour television rating for the Broncos-Steelers game was, you guessed it, 31.6.

And you thought God didn’t care about football games.