Think its just in your genes? 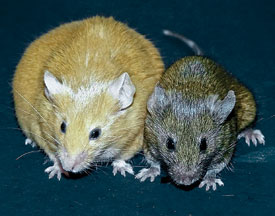 I wanted to bring out some of my older work occasionally to expose CMR readers to some of the more pressing issues in biotechnology. One of those issues is the popularity of genetic determinism.

Scientists everywhere seem to find a gene for everything from promiscuity to being a ruthless dictator.  One company is now selling a simple DNA test that they claim can tell everything you about your children, all of their future strengths and weaknesses.  They claim that “without you understanding what your child’s inborn talents are, your child is in for disaster!”

The premise that we are no more than the sum of the genes we inherited from our parents is not only a dangerous reduction of humanity to a simple sequence of letters, but it is outright wrong.  Wrong both morally and scientifically.  Science is quickly learning that genetics is a lot more complicated that we thought.  It is not just about what genes you have but what genes are turned on or off.

A whole branch of genetics called epigenetics is dedicated to understanding how and why genes are expressed.  It turns out the sequence of DNA is only a part of the picture.  Environment also plays a very important role.  Let me give you a very powerful example that I use all the time.  The following picture is of genetically identical mice.

These mice were created by Randy L. Jirtle at Duke University.   Jirtle studies the effect of the diet of pregnant mice on the resulting offspring.  He was able to produce genetically identical mice that looked nothing like each other. That’s right: these mice are identical twins.  So what causes one to be fat and yellow and the other one to be small and brown?  One received a lot of folic acid while he was in his mother’s womb.  The other did not.

So if one small factor like a single vitamin during gestation can create such huge differences in genetically identical individuals, what could a lifetime of a millions of environmental changes effect?  What if diet, exercise, and home life are just as important to shaping a human being as genes are?  Before we fell in love with the gene as a scapegoat, we used to understand that these where important factors in molding a person.

So why are we so in love with genetic determinism?  Because it plays to our arrogance and and our laziness.  If children have inborn talents and weaknesses that cannot change, that lets every single parent off the hook doesn’t it?  If I am destined to be fat because of my genes, then I really have no reason to get up off the couch do I?  And if a person is simply the sum of his genes and some of us are more successful than others, then how easy is it to believe that some of us are genetically superior to others?  It made sense to Hitler and now we, cognizant or not, are following the same path.

On that path we are led by the “best and the brightest” minds.  Take Julian Savulescu for example.  He is chair of the Oxford Center for practical ethics at the University of Oxford and he believes that we should choose the best children just by looking at the sequence of their DNA while they are embryos:

Third, we have a moral obligation to use these technologies to have children who have the best prospects of the best life. I have called this “procreative beneficence.” This includes not only selecting against genes that cause disease, even minor disease, but also selecting against those genes which dispose, even weakly, to significant impediments to wellbeing, like poor impulse control or lack of empathy…. Rather than responding to irrational fears about designer babies, we should be encouraging people to use technology to have children with the best prospects of the best life.

Incidentally Dr. Savulescu is the editor of the Journal of Medical Ethics that defended the publication of the recent reprehensible paper on after-birth abortion.  And he is by no means the only brain in an ivory tower suggesting we make sure only the “genetically fit” are born.  Brains with enough arrogance to think we even know how to define “genetically fit.”  I could go on all day listing the names of academics (and Nazi dictators) who have fallen in the genetic determinism trap.

Whether it is your neighbor or some Ph.D. from Oxford, just remember the picture of the mice above every time someone suggests that it is the sequence of your DNA that defines you.