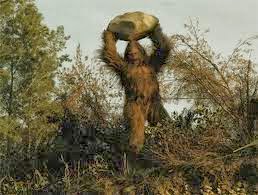 Between the stuffed Sasquatch and the terrifying wax chupacabra is an exhibit at the CMR Museum featuring an even more rarely sighted creature – the pro-life Democrat. While there have been a great many supposed sightings of the being, none have turned out to be true in recent decades. Some cryptozoologists suspect that the pro-life Democrat might be extinct and relegated to the stuff of legend.

Reminding some of the incident where a squatch hunter falsely claimed to have caught a bigfoot, the people of West Virginia believed they had elected a pro-life Democrat but sadly it turned out that it wasn’t an actual pro-life Democrat. It was just a Democrat who needed pro-life votes.

West Virginia Governor Earl Ray Tomblin vetoed a bill this weekend that had passed with overwhelming bipartisan majorities in both houses of the state legislature to prohibit abortions after twenty-weeks, when the child in the womb can feel pain.

I do not know Governor Tomblin, so I cannot comment one way or another on his honesty or good faith. But if he is being truthful about his pro-life convictions, I am puzzled as well as disappointed by his decision to veto a piece of legislation that would have protected unborn babies from being killed by abortion after twenty-weeks. He says that he was advised by lawyers that the bill was unconstitutional and by medical professionals that it was a threat to women’s health. But only lawyers and medical professionals who were already committed to the radical pro-late-term abortion ideology the Governor claims to reject would have made such claims. So the question naturally arises: Is the Governor hiding behind bad “advice” that he deliberately procured to provide cover for a veto that serves no interest other than those of the powerful abortion industry and its lobby?

I think we have greater chance of finding the squatch than an actually elected pro-life Democrat.