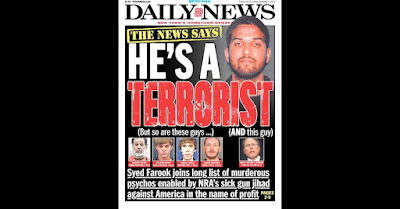 The attempts to link the San Bernardino jihadists to conservatives is pretty much done now. Hey it’s not like they didn’t try though. Now, the left is simply trying to claim some form of hybrid workplace/jihadi thing. I don’t even know what that means considering the couple’s ties to terror and the fact that their garage was an armory. But boy did the media try.

CNN seemed desperate to pin the killings on the right wing, according to Newsbusters. The news channel hosted former FBI official Tom Fuentes who said that he believed that “an anti-government domestic militia group” was responsible despite having zero information other than that there was violence taking place so it must be conservatives.

CNN law enforcement analyst Harry Houck told Erin Burnett that the perpetrators “could be some right-wing group, for all I know.” Seems like a jump to make when you’re essentially trying to say “I don’t know.”

Well it appears to be a kind of hybrid workplace jihad. He targeted his coworkers, but he also recently raveled to Saudi Arabia. On his website [a dating profile] he appears to be an all-American boy, he enjoyed snowboarding, working on cars, and guns , he was very comfortable with the gun culture.

But the focus on pro-lifers as possible perpetrators was particularly intense.

An MSNBC news host said, according to LifeNews.com: “San Bernardino about an hour outside of Los Angeles, inland. ‘Way from the ocean. This area looks to be an area with several service buildings, medical service buildings. A neighborhood nearby. The Planned Parenthood of San Bernardino is a few blocks away and told us they’re not involved in this in any way obviously in light of the shooting last Friday in Colorado Springs and making sure that people are not confused there because it is close proximity to these facility.”

So let’s get this right. MSNBC heard there was a shooting and immediately called Planned Parenthood to see if they were ok and still aborting babies. Priorities, huh? But think about that, MSNBC hears there’s a shooting and they think pro-lifers. What kind of demented weirdos are they?

“Some people might be concerned about this following what happened in Colorado a few days ago. We’ve gotten word that this shooting is not at a Planned Parenthood. So that’s some perspective on where the shooting may be.”

The another CNN anchor pipes up: “Is there a Planned Parenthood nearby?”

Let me inform you CNN punks of something. When there’s a mass shooting, normal people don’t think pro-lifers. I know you do but I said normal people. Normal people question if it’s terrorism but you’re too twisted by the leftist agenda to have anything close to a normal reaction.

This is just crazytown. Expect the media to move fast away from this story while they attempt to hold on to the confusing “hybrid workplace jihad” thing they’re trying to make an actual thing. That’s like calling 9-11 a “hybrid airline jihad.” It’s jihad. Plain and simple.

Update: And now this from The Daily News, equating the NRA with terror.

Wow. Doubling down on stupid, huh? And they wonder why circulation plummets.