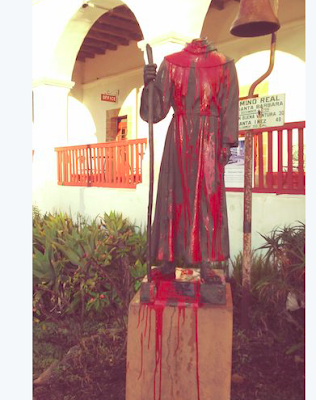 Somehow throughout all of his missionary work, Saint Junipero Serra managed to avoid being beheaded…until now.

Leftist vandals did not satisfy their bloodlust with the removal of Confederate statues; they’ve now begun their assault on religious figures that triggers their social justice warrior sensitivities. Last month, they attacked a statue of recently canonized St. Junipero Serra with red paint and a swastika, this month they have beheaded the beloved saint.

According to SFGate, “a bronze statue of the Roman Catholic priest Junipero Serra at the Old Santa Barbara Mission was decapitated and doused with red paint on Sunday night or early Monday morning.”

No note was left as to why but other statues of St. Junipero have been vandalized and they’ve said it’s because he was mean, awful and rotten to the Native Americans. However, when he passed away many native Americans came to his funeral. That’s not to say he never did anything wrong but…the guy is a saint so…

Note to Christians, this is how they feel about you.