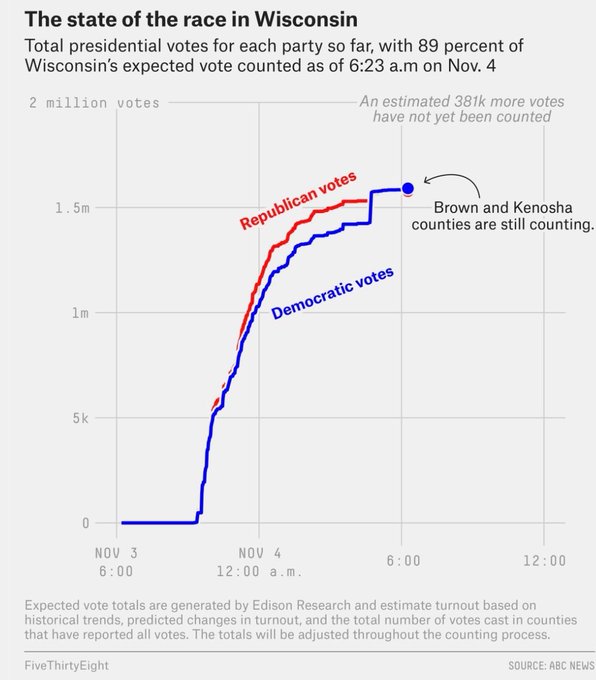 It is what it is. Many of us went to bed last. night and President Donald Trump was ahead in many states and looked to likely have won reelection. Then an interesting thing happened. All the Democrat controlled states stopped counting. Philadelphia, Detroit, and Atlanta. They stopped.

And when we woke up, Biden all of a sudden gained hundreds of thousands of votes. It’s fraud. Let’s call it what it is. It’s a coup. It’s an intensional subversion of the will of the people to take control of the government.

The media and Big Tech are complicit. They’ve shut off our voices. But we always told ourselves that we have the vote. In the end, that’s what the entire country is based on. We have the vote.

And now?  We have thousands of ballots showing up in the dead of night.

That is not a natural blip. How does that happen other than a truckload of ballots all for Biden got dumped in?

Why was Florida able to count their mail in ballots in advance but Pennsylvania decided they wouldn’t until after the election. Why? Because they needed to know how many they’d need. That’s why.

Those in power are playing a dangerous game. I pray. I pray because this country can only be saved with supernatural intervention. We need to push back. In that, Thank God Trump is a fighter. He will fight this. But he will need evidence of fraud. For that, someone’s heart will have to turn and at great personal cost that person will have to admit the truth. Courage is not something prevalent in our society.