Insane. The Pro-Lifers are Being Investigated. Not the Clinic 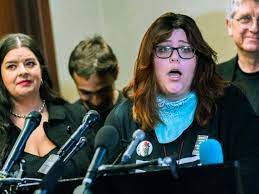 OK. Firstly. You can call me psychic because this makes my pro-life novel “American Antigone” seem extremely prescient.

So, for those who are unfamiliar, a couple of pro-life women got a hold of a box full of aborted fetuses. They said they asked the trucker but the trucker is denying it. They said they wanted to give them a funeral. When they opened it up, they said that the remains included babies who seemed to have been viable and possibly victims of partial birth abortions. This report, however, indicates that the police are ONLY investigating the pro-lifers. So predictable.

This media report also exhibits their disgusting bias by blaming the pro-lifers for a breach of privacy. Let’s be clear, the remains of human children were loaded into waste bins. How far does this “privacy” extend for women? I mean, this is ridiculous. I think your privacy ends when it’s zipped into a bag, tossed into a bucket, and dragged to the curb.