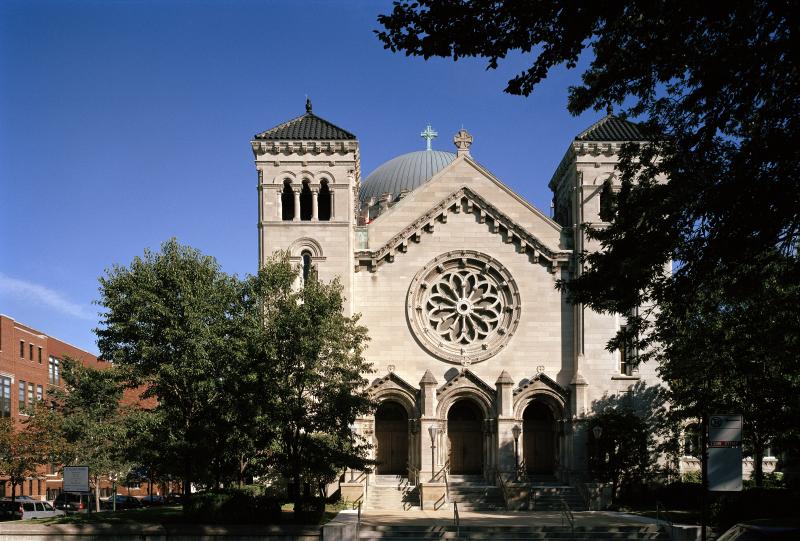 The Chicago Catholic church of the day is St. Clement’s in the Lincoln Park neighborhood. It was dedicated in 1918 and has been called the little sibling of the great cathedral in St. Louis because it was designed by the same architects, Barnett, Haynes and Barnett. The exterior shows a subdued sort of Byzantine Romanesque architecture of great dignity, but opens up to a golden splendor. Its interior murals were painted by a Ruthenian rite priest, Gleb Werchovsky, who understood the iconic tradition of the Eastern rites very well. Over the altar is the great Tree of Life mural in which all of creation is shown in an ordered whole of the restored Garden of Eden, where the cross replaces the Tree of the Knowledge of Good and Evil which brought about the Fall. The dome shows the perfectly ordered realm of the heavens, where angels mingle with the stars of the solar system and the symbols of the zodiac (which were used by God to tell the coming of Christ—the three Magi followed the stars). Stained glass windows of angels and saints complete the heavenly court. The iconography all represents the Wedding feast of the Lamb, the time when Christ and His Church are fully united at the end of time. In this way, all of creation is brought to God, shown filled with His divine life—since it was all of creation that fell with our first parents. Here is a great example of the “signs and symbols of heavenly realities” as Vatican II talked about! This church is pictured and discussed in the book Heavenly City: The Architectural Tradition of Catholic Chicago, available at the link on this page.