I Heart The Pitter-Patter of Carbon Footprints 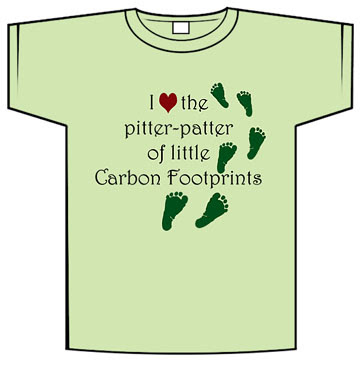 When I was a reporter I had my first child. It was a slow news day. I think it was a Saturday and another reporter and I were just talking the day away while listening to the police scanner.

He said he was never going to have children because the world was such an awful place. I laughed and said I at least wanted to field a basketball team. He was quite simply aghast. I’m not kidding you when I tell you that he honestly believed that I was wrong to even contemplate such a thing. Don’t I care about the world? Overcrowding? Global warming?

At the time I just laughed because I thought that would annoy him. I know. I know. I try to be a good person but sometimes I just have to tweak the looney tunes secularists a little bit so I said maybe I’d make it a baseball team.

Now as a father of five children I have actually been approached by absolute strangers who ask me point blank in front of my children if “I’m done.” It’s unbelievable but true. Some people after a few niceties have inquired whether I cared about the planet at all?

I’ve never known exactly what to say…that is until yesterday when a frequent visitor on this blog named Meg upped the tweaking ante by creating the perfect t-shirt for just such a situation. It’s hilarious. Go visit her site at Promo Presto if you’re interested. She actually makes t-shirts. No matter what though I thought many of you would get a kick out of it.