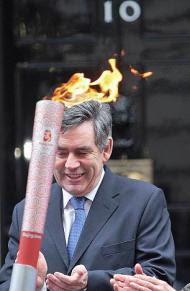 British Prime Minister Gordon Brown will not attend the opening ceremony of the Beijing Olympics in August. So China, in a retaliatory strike, set his hair on fire. When confronted, Chinese officials apologized and said it was just force of habit.

“When we hear someone come out against us our instincts take over and things…you know…get messy,” said one Chinese official who asked to remain nameless.

On a slightly serious note, one thing I cannot understand is why is President Bush not boycotting at least the opening ceremonies. This is the President who speaks eloquently only about freedom and the spread of democracy. Yet now when a ghastly regime hosts the Olympics he is mute.

I’m not in favor of boycotting altogether and I understand that the President refusing to show up to the opening ceremonies is just a symbolic stand but I believe it should be done if only as a sign to the oppressed in China that America is on their side.

I half wonder if he’s not doing it just because Hillary Clinton suggested it.