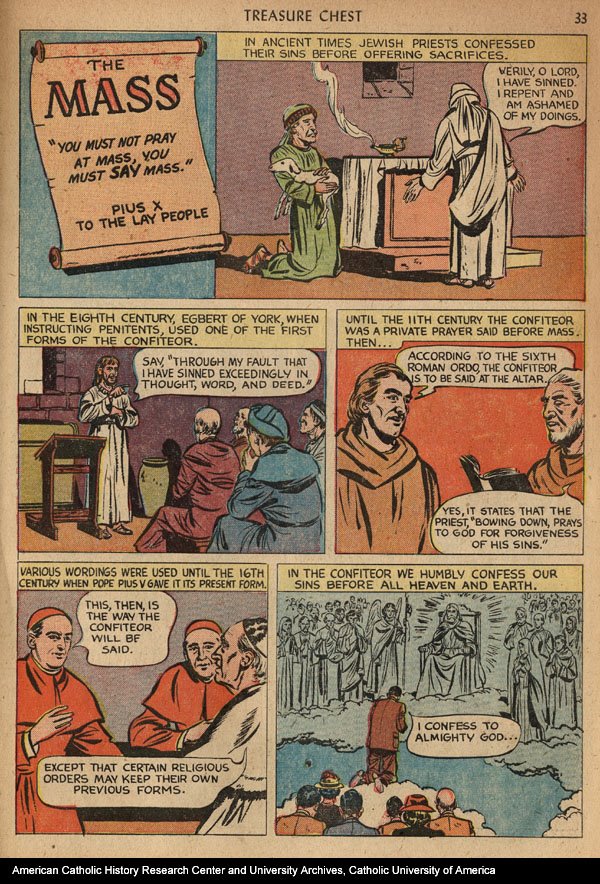 A good friend recently pointed out a web site which has scans of Catholic comic books from the 1940s through the 1960s. On the one hand, they are fun and a great snapshot into mid twentieth- century Catholicism. On the other hand, it is remarkable how much serious content they bring with them. The images pictured here come from a 1948 issue on the Mass, which starts with Old Testament typologies, gives a short history of the development of the rites, and then establishes that the earthly liturgy takes place within the context of the joining of heaven and earth. Interestingly its language shows the effects of the liturgical research of the time on the nature of the Mass as corporate worship of the Mystical Body. Here, a priest saying Mass at the high altar with the pre-conciliar Missal, ad orientem, is said to be celebrating Mass “in the community or group form of praying” (click an image for larger view). “None of us is alone,” it says, “we are all one in Christ.” This simple comic book presents a proper view of liturgical community, one in which we form one Mystical Body of Christ, addressing our prayers to the Father, through the Son, who is sacramentally represented to us in the priest acting in persona Christi. That this notion of community became distorted after the Council no one can deny, but the proper roots were there, even for 10 year olds.