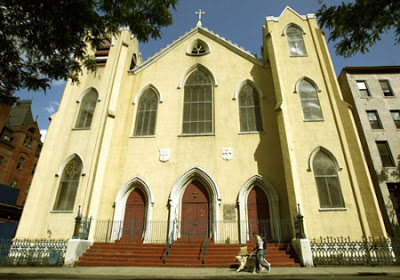 St. Brigid’s in New York City was saved from the wrecking ball by an anonymous $20M donation, says The New York Daily News.

The historic church in the East Village, often called “The Famine Church” because it was built mainly by Irish immigrants who came to America during the potato famine, was saved from the wrecking ball today by a $20 million donation from someone being called an anonymous angel.

What a great story.

The huge – and unexpected – cash infusion will allow the nearly 160-year-old church to reopen once badly-needed repairs are finished.

“This magnificent gift will make it possible for St. Brigid’s Church to be fittingly restored with its significant structural problems properly addressed,” Edward Cardinal Egan said.

Egan did not reveal the identity of the donor, only that it was a “he” and that the “unexpected but very welcome gift” was given after a private meeting at the cardinal’s residence.

This ends a big effort by many in the community to save the church which even went to court. About six months ago, an appellate court OK’s the archdiocese’s plans to destroy the Church. “We rejoice today in the miracle that has saved our church,” said Ed Torres, chairman of the Committee to Save Saint Brigid’s.

One neighborhood man tacked a poster to the scaffolding covering the church’s yellow facade that read, “Thank You Lord for Answering our prayers.”

“In this crazy world we live in, people say miracles don’t exist,” said another man. “I would like to prove somebody wrong.”

But here’s the thing, one of the reasons the church was closing was because of falling attendance. I fear that these folks may have been more concerned with the church as a historical building then as a church.

Let’s hope that this miraculous anonymous donation and the resulting restoration leads to a stronger attendance in the beautiful new pews.