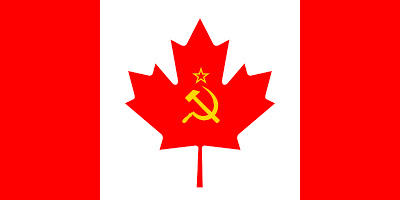 I am sure you have heard the many scary stories coming from Canada by now, but just in case you haven’t I thought I should tell you before you put the deposit down on that exciting Canadian vacation.

Our chilly Canadian comrades are known as a generally polite bunch. That is as long as you tow the party line. Deviate from state mandated secular politeness and they will bring down the full wrath of the KGB on you. In Canada, the KGB goes by the acronym HRC. The dreaded Human Rights Commission.

The HRC is a pseudo-legal tribunal that does away with those pesky things like the constitution, rules of evidence, and due process. And the beauty of the HRC is that they are accountable to no one. Let us take a look at just some of what the various Human Rights Commissions have been up to lately.

[Lifesite] On Friday, the Alberta Human Rights Commission ordered Alberta pastor Stephen Boissoin to desist from expressing his views on homosexuality in any sort of public forum. He was also commanded to pay damages equivalent to $7,000 as a result of the tribunal’s November decision to side with complainant and homosexual activist Dr. Darren Lund. The tribunal has also called for Boissoin to personally apologize to Lund via a public statement in the local newspaper.

The remedy order demands the pastor to pay $5,000 to Lund personally for the “time and energy” he has expended and for the “ridicule and harassment” he has faced. Combined with that financial burden, Boissoin must also pay up to $2,000 in expenses to one of Lund’s witness, provided she produces records of such costs.

Why is Boisson being unconstitutionally “ordered” to keep his views to himself? He wrote a letter to a local paper that said the following, “Children as young as five and six years of age are being subjected to psychologically and physiologically damaging pro-homosexual literature and guidance in the public school system; all under the fraudulent guise of equal rights.”

Then there is the more well known case of Mark Steyn. Some background:

[Chronicle Herald] The complaint, for those who don’t know the background, concerned an excerpt from Steyn’s book, America Alone, published by Maclean’s in October 2006. In that piece, Steyn argued a demographic decline in Western nations, combined with the unsustainability of the social democratic state and what he termed “civilizational exhaustion” – against which he compared much higher birth rates among Muslim populations, especially in Europe – meant that the West would likely become increasingly Islamicized in terms of acceptance of Muslim societal institutions, such as, for example, sharia law.

Now you might think so what if they have a “trial”, if the evidence isn’t there then Steyn and Macleans will get off scott-free right? History does not support that conclusion. The HRC has not once dismissed a charge that has been brought before it, in 31 years. Not once!

That is not good news for Father Alphonse de Valk either. Father is now being investigated for hate crimes as well.

[WND] “Father defended the [Catholic] Church’s teaching on marriage during Canada’s same-sex ‘marriage’ debate, quoting extensively from the Bible, the Catechism of the Catholic Church, and Pope John Paul II’s encyclicals. Each of these documents contains official Catholic teaching. And like millions of other people throughout the world and the ages – many of whom are non-Catholics and non-Christians — Father believes that marriage is an exclusive union between a man and a woman.”

National Review in an editorial on this very subject says enough is enough. Something mus be done.

[NRO]Supporters of free speech can do a few simple things. First, the Canadian and U.S. media need to start speaking out soon, and loudly…Second, American and international political figures also need to speak out. A surefire way to get these tribunals onto the front page in Canada would be if they were roundly condemned by leaders from around the world…Third, support is needed for the inchoate political attempts to shut down these ridiculous inquests.

We should support any and all efforts to stop this in Canada or it will be in our own backyards before you know it.

In the meantime, if you still want to take that Canadian ski vacation, make sure you stay to the left.