Crucified Ronald McDonald Is A Cliche 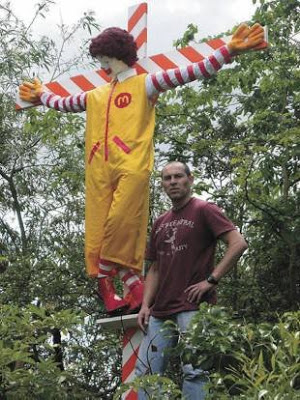 This story from the Hornsey and Crouch Journal has every element I love in a sacrilegious art story. First, introduce the brave courageous artist, bring in the overreacting Christians, sprinkle on a suggestion that religious fanatics are responsible for all the world’s evils, and finally wheel out the wimpy clergy. Seriously, go back to every blaspheming art story over the past decade and it will have these elements.

So over in England, an effigy of the fast food icon Ronald McDonald was crucified sparking a mini-outrage among neighboring Christians last week.

And then the man responsible for the exhibit cried tearfully to the press that he was scared of being beat up – by a bunch of girls.

Teenage girls who he called “protestors” allegedly pinned the exhibition organiser to a wall as they demanded the removal of a figure of Ronald McDonald hanging from a cross.

Tony Peakall, organiser of the Tidy Art exhibition, revealed how he was attacked by around 10 girls (that means probably three.) They reportedly grabbed him and shouted at him to take it down. He said: “When I tried to explain about the piece they said if it was a Muslim symbol we wouldn’t do it because we would get bombed. It was scary. They threatened me saying I would be lucky if something doesn’t happen to me. We have no plans to remove it.”

Wow. He got threatened by a bunch of girls and told on them and then added snottily while wiping his nose that he didn’t care what those mean old girls said to him that he was going to be a brave big boy.

But here then comes my favorite quote from every artist who creates some stupid sacrilege. They’re always shocked, just shocked that they’re causing an uproar. Janitzio Moreno, 47, said: “I’m not apologising for it. If there are reactions then it tells us more about the society we live in. I think a lot of evils in the world are a direct result of religious fanaticism, and this is another little example.”

There’s been a lot of evil in the world from failed artists too. Remember, uhm…HITLER!

And now bring in the ineffectual clergy. “The Bishop of Edmonton, The Right Reverend Peter Wheatley, declined to comment.”

So while the clergy couldn’t muster a comment, some common sense was to be had from a spokesman for McDonald’s, who said: “It seems inappropriate to place an image of Ronald McDonald on any religious artifact.” Wow. Was that really so hard?

So there you have my deconstruction of every blaspheming artist story that ever was and ever will be. This story will be repeated often in coming years until they once again get brave enough to start feeding us to lions. I’ll also try to have funny little stories about that too for your enjoyment because we might as well laugh while the world is being flushed down the toilet. Oh excuse me, something is growling and pawing at my front door. I’ll be right ba…