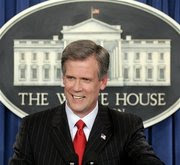 Tony Snow, the former White House press secretary and conservative pundit who bedeviled the press corps and charmed millions as a FOX News television and radio host, has died after a long bout with cancer, according to Fox News. He was 53.

A syndicated columnist, editor, TV anchor, radio show host and musician, Snow worked in nearly every medium in a career that spanned more than 30 years.

But more importantly, Snow was a devoted husband and father. He truly seemed like one of the good guys. I was pulling for him and was sorry to read the news this morning.

Knowing so many who have had cancer ruin or alter their lives, Snow’s death truly saddens me. My deepest sympathies go out to his wife and three children.

First, live boldly. Live a whole life. I have five tips for pulling this off and – let me warn you — they’ve all been road tested. I learned the old-fashioned way, through trial and error.

Number one, think. You’ve got a diploma now, you’ve got a brain. Put them to work.

Catholic University has equipped you with an extraordinary and valuable tool. It’s taught you how to learn. This handy skill never wears out, so please use it all the time. After all, the human mind is a wondrous thing. It’s restless, always eager for action, always raring for places to go. While you’ve been here you have developed analytical skills, but they alone won’t get you through. You’re smart but we humans are also gullible. Really gullible. Just ask the serpent in Eden. Therefore you’re going to need to develop some discernment, some common sense…

But see, there’s more. Once you’ve gotten past the mirror phase, then things begin to get really interesting. You begin to confront the truly overwhelming question: Why am I here? And that begins to open up the whole universe, because it impels you to think like the child staring out at the starry night: “Who put the lights in the sky? Who put me here? Why?” And pretty soon you are thinking about God. Don’t shrink from pondering God’s role in the universe or Christ’s. You see, it’s trendy to reject religious reflection as a grave offense against decency. That’s not only cowardly. That’s false. Faith and reason are knitted together in the human soul. So don’t leave home without either one.

Update by Patrick— Tony said this about his cancer in Christianity Today.

…we shouldn’t spend too much time trying to answer the why questions: Why me? Why must people suffer? Why can’t someone else get sick? We can’t answer such things, and the questions themselves often are designed more to express our anguish than to solicit an answer.

I don’t know why I have cancer, and I don’t much care. It is what it is—a plain and indisputable fact. Yet even while staring into a mirror darkly, great and stunning truths begin to take shape. Our maladies define a central feature of our existence: We are fallen. We are imperfect. Our bodies give out.

But despite this—because of it—God offers the possibility of salvation and grace. We don’t know how the narrative of our lives will end, but we get to choose how to use the interval between now and the moment we meet our Creator face-to-face.

From what I know of Tony, I suspect that meeting went well.