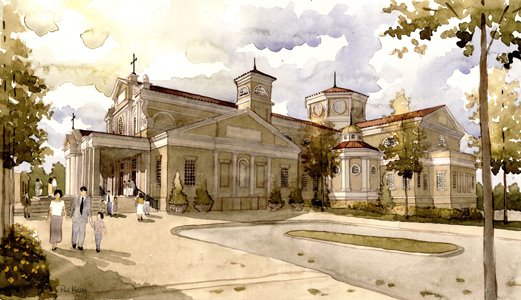 What follows is the third installment of an architectural theology series using the new church of Saint Michael the Archangel in Leawood, Kansas as an example.

As part of the movement of “New Classicism,” the church of St. Michael the Archangel partakes of aspects of the theory of classical architecture which date back more than 2000 years. One way to “read” classical architecture is in the enrichment which clarifies its structure, known as decoration.* The exterior of the new church shows different uses of brick and stone. Wherever stone appears, it indicates structure; the brick indicates enclosure. A good analogy might be a tent used for camping, where the tent’s poles provide the vertical support and the nylon encloses and keeps out the weather. Classical architecture begins with this primary notion of structural logic, and then raises it to poetic expression.

At St. Michael’s, this decoration begins with the base or foundation of the church, made of stone and therefore speaking of the solidity of the horizontal foundation of the building. Moreover, the foundation receives an enrichment called rustication which makes each block appear thicker and gives the appearance of solidity and strength. Wherever verticals support is indicated, the materials are stone once again. This is most obvious in the columns, the primary vertical supports which rise up and meet an enriched horizontal beam called the entablature. The corners, which support downward forces from the roof as well as walls in two directions, receive rusticated blocks of stone called quoins. They therefore appear to be strong enough to carry the extra weight. Even the scroll-like devices on the second floor of the front porch have a virtual structural function, visually transferring the weight of the roof down a graceful curve to the first story.

Contrasting with the stone elements, the church uses an even, golden brick which speaks of the enclosure of interior spaces. The color chosen harmonizes with the preexisting school building, but evokes both the brick color used in Roman churches as well as the golden walls of the Heavenly City made of many “living stones.” The architectural details of the church building are designed with an increased level of sophistication and clarity from the school, suggesting the proper hierarchy of the pilgrimage journey from the earthly pursuits to their completion in heaven. Architecture, then, not only keeps the rain off our heads on Sunday morning, but prepares us spiritually by getting us accustomed to the order and clarity of heaven.

* the term decoration here is used according the definition given by William Carroll Westfall in Architectural Principles in the Age of Historicism (Yale, 1991).