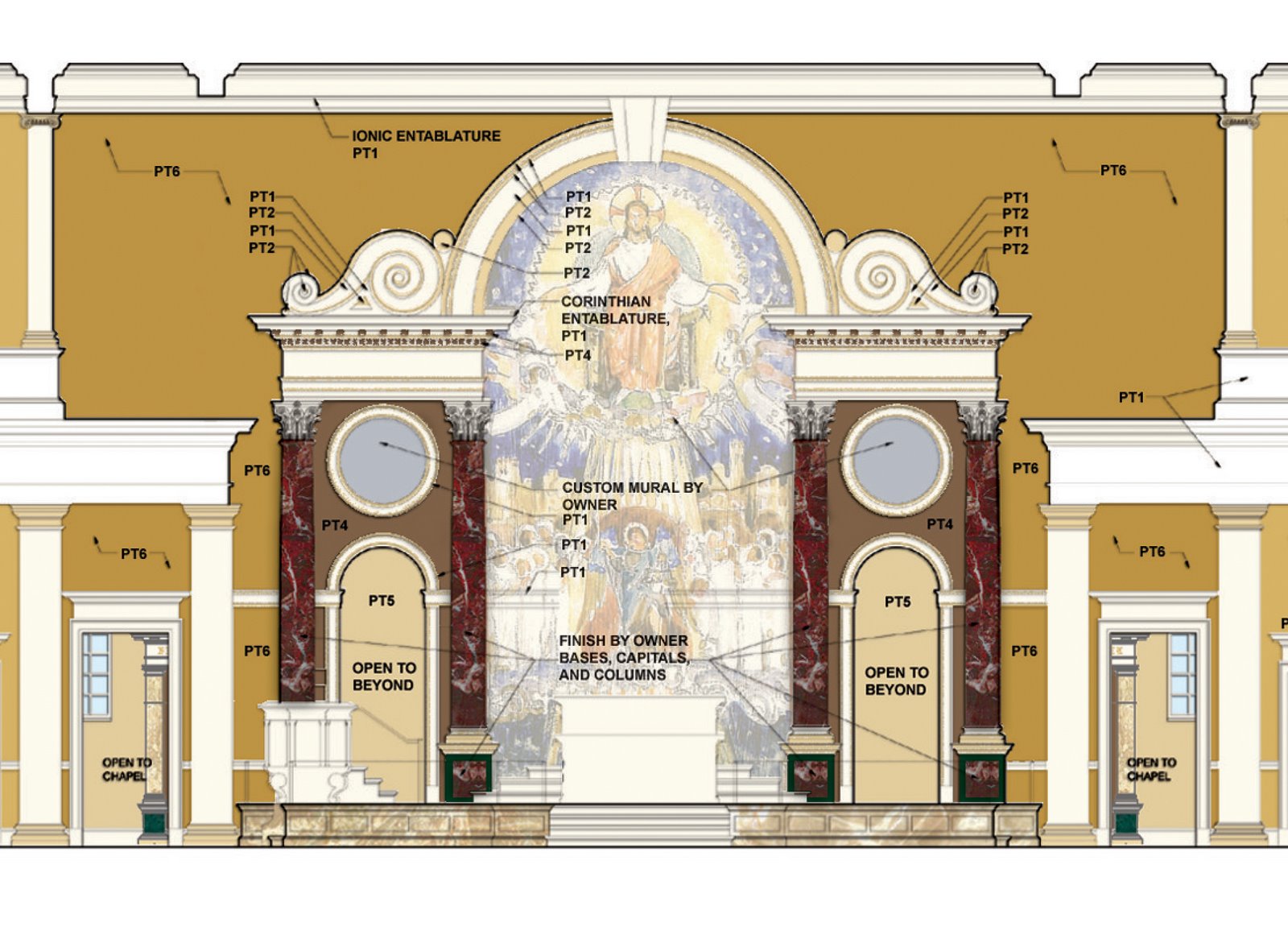 This post serves as part 5 of a series on architectural theology using the new church of Saint Michael the Archangel in Leawood, Kansas by architect David Meleca as an example. It appeared as a bulletin article at the parish.

The use of columns at the new church of Saint Michael the Archangel is based on a longstanding historical and theological precedent combined with new innovation. Each type of column has gained a conventional and theological meaning through the ages, and these associations are put to use in the design of the new church. Columns have traditionally been understood not only to symbolize people, but also to be markers of the relative importance of a building’s various parts. In the traditional signification of meaning, the hierarchy of columns from low to high followed this progression: Tuscan, Doric, Ionic, Corinthian and Composite. At St. Michael’s, various columns are used to mark the progression from the outside world to the altar as the focus of Catholic life in the sacred liturgy. A simplified column which resembles the Tuscan lines the courtyard of the school, and suggests the distance farthest from the sanctuary. The relatively simple Doric columns appear on the exterior porch of the church and line the nave, suggesting a step upward in the hierarchy as one moves from outside to inside. At the upper story of the nave interior, Ionic columns with their curled scrolls called volutes indicate the movement up the architectural hierarchy as the columns surround the nave and approach the blue ceiling, itself indicating the sky above the Heavenly Jerusalem.

A dramatic shift happens in the sanctuary, however, as the columns type jumps up to the leafy Corinthian, traditionally a column type which marks very high status. As the place in the church where the principal action of the sacred liturgy occurs, the sanctuary receives an architectural treatment appropriate to its dignity. Finally, the altar itself will include small columns using the Composite order, a combination of the leaves of the Corinthian capital and the scrolls of the Ionic. This capital marks the very highest status, and is reserved solely for the altar as a sacramental image of Christ Himself and the most important object in the church building. Moreover, this Composite capital will not simply be copied from ancient examples, but in a way which shows the continued creative potential of classical architecture, will incorporate a sword of St. Michael in the scrolls of the capital, reaching down into its leaves. So this “St. Michael’s Composite” will be the first and only one of its kind in the world while partaking of thousands of years of tradition.