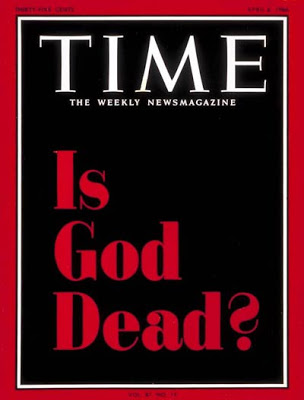 I guess Time Magazine is still standing behind their Oct. 22, 1965 story which stated:

We must recognize that the death of God is a historical event: God has died in our time, in our history, in our existence.

Well, forty years later, you’ve got to hand it to the boys at Time Magazine. They really did it this time. They managed to turn a story about how faith helps people live longer and healthier lives into a scientific snore fest which reduces God to something which can be measured by beakers and CT scans. Here’s Time’s story:

Most folks probably couldn’t locate their parietal lobe with a map and a compass. For the record, it’s at the top of your head — aft of the frontal lobe, fore of the occipital lobe, north of the temporal lobe. What makes the parietal lobe special is not where it lives but what it does — particularly concerning matters of faith.

Needy creatures that we are, we put the brain’s spiritual centers to use all the time. We pray for peace; we meditate for serenity; we chant for wealth. We travel to Lourdes in search of a miracle; we go to Mecca to show our devotion; we eat hallucinogenic mushrooms to attain transcendent vision and gather in church basements to achieve its sober opposite. But there is nothing we pray — or chant or meditate — for more than health.

Health, by definition, is the sine qua non of everything else. If you’re dead, serenity is academic. So we convince ourselves that while our medicine is strong and our doctors are wise, our prayers may heal us too.

Here’s what’s surprising: a growing body of scientific evidence suggests that faith may indeed bring us health. People who attend religious services do have a lower risk of dying in any one year than people who don’t attend. People who believe in a loving God fare better after a diagnosis of illness than people who believe in a punitive God. No less a killer than AIDS will back off at least a bit when it’s hit with a double-barreled blast of belief. “Even accounting for medications,” says Dr. Gail Ironson, a professor of psychiatry and psychology at the University of Miami who studies HIV and religious belief, “spirituality predicts for better disease control.”

It’s hard not to be impressed by findings like that, but a skeptic will say there’s nothing remarkable — much less spiritual — about them. You live longer if you go to church because you’re there for the cholesterol-screening drive and the visiting-nurse service. Your viral load goes down when you include spirituality in your fight against HIV because your levels of cortisol — a stress hormone — go down first. “Science doesn’t deal in supernatural explanations,” says Richard Sloan, professor of behavioral medicine at Columbia University Medical Center and author of Blind Faith: The Unholy Alliance of Religion and Medicine. “Religion and science address different concerns.”

Essentially, they’re saying “This is your brain on faith.”

Time tells us here that religion and faith might simply be explained in a physical manner. Yet, Time Magazine itself is telling us that, in fact, the opposite is true in that our physical bodies might depend on our faith to be healthy. Odd, they didn’t expound on that.

If science persists in viewing faith as a physical boon I’d bet it won’t be long before a pill is introduced called “Synthetic Faith” which would mimic all these positive attributes which science has tested in religious people with none of those pesky rules. And you get to sleep in on Sundays! So you could get all the benefits of faith without ever actually having any. I could hear the commercial now with the fast talking guy at the end listing the possible negative side effects of “Synthetic Faith.” “Could cause loneliness, depression, nihilism and possible damnation.”