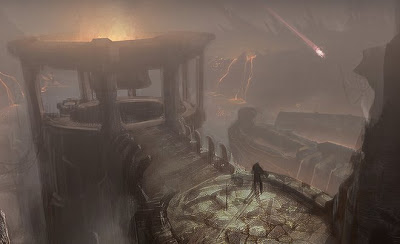 In about one year slackers all over America aren’t going to hell in a handbasket. They’ll do it right from their beanbag chair in their mother’s basement. According to Wired:

Electronic Arts’ upcoming game Dante’s Inferno is a riff on God of War that stars a beefed-up warrior based on the author of The Divine Comedy. Seriously.

For those of us who spent our formative years sleeping through Classics lectures, Dante Alighieri’s 14th-century epic poem The Divine Comedy is largely a mystery — 14,000 lines of allegory chronicling the author’s philosophical journey through hell, Purgatory and beyond. Electronic Arts hopes to jog our collective memories a bit with Dante’s Inferno, an action game adapted from the first section of the Comedy.

This contemporary take on the author’s trip through the nine circles of hell follows the general framework of the original piece, with artistic liberties taken to convert demure prose into a fast-paced action-adventure title for PlayStation 3 and Xbox 360.

OK. “Artistic liberties” include some minor changes like – while Dante was a sensitive poet now he’s a jacked up warrior from the Crusades with a bad attitude who scythes his way through demonic hordes on a quest to find his murdered love Beatrice, whose soul was kidnapped by Lucifer.

Yeah, so like I said, pretty much right out of the text.

And the dear hearts producing the video game put a Pope into Hell for good measure. Pope Celestine V makes a cameo (to be fair it is believed that Dante referenced him in Hell because of his resigning the Papacy). However, I’d love to see if any figures from other world religions hold a prominent place in the game’s Hell.

In fact, if I remember my Dante correctly, Dante put Mohamed in Hell -and not just any Hell but a particularly garish Hell.

A cask by losing centre-piece or cant
Was never shattered so, as I saw one
Rent from the chin to where one breaketh wind.

Between his legs were hanging down his entrails;
His heart was visible, and the dismal sack
That maketh excrement of what is eaten.

While I was all absorbed in seeing him,
He looked at me, and opened with his hands
His bosom, saying: “See now how I rend me;

How mutilated, see, is Mahomet;
In front of me doth Ali weeping go,
Cleft in the face from forelock unto chin;

And all the others whom thou here beholdest,
Disseminators of scandal and of schism
While living were, and therefore are cleft thus.

A devil is behind here, who doth cleave us
Thus cruelly, unto the falchion’s edge
Putting again each one of all this ream,

When we have gone around the doleful road;
By reason that our wounds are closed again
Ere any one in front of him repass.

So I’m interested to see since they so bravely put a Pope prominently in Hell, let’s see if they’ve got the guts to put Mohamed there. Something tells me they’re going to skip those cantos.

Pontius Pilate joins in. Not sure how Dante dispatches him but I’ll bet Dante has some cool line right after like “What is truth? My Magma Blaster is all the truth I need.”