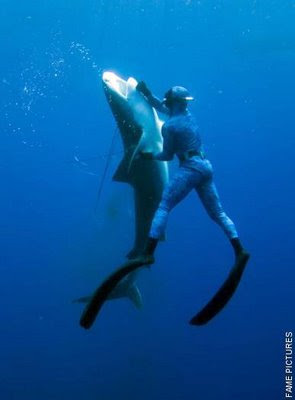 CMR says now that we’ve got sharks on the run, let’s take the fight to them. This fight’s been brewing for a while now. We’re the kings on land. They’ve got the ocean locked up which makes up about 2/3 of the Earth. I think it’s time we took some of that. And put that guy in charge.

PETA just invented George Clooney-flavored tofu. Wait. It gets worse. Clooney’s sweat soaked towel which some lunatic picked up from a gym is the inspiration for the taste. The President of PETA wants to use his sweat to create Clooney tofu that will “spare animals from being killed for the table.” She went on to explain that the science is pretty simple, like “making artificial chicken flavor for instant gravy.” Ok. OK. We can talk science later but someone still had to taste the sweat on the towel. And that just weirds me out.

The PETA President said “I thought, ‘What would make tofu more attractive to people?’ … I can see people having parties to try CloFu.” Alright, CMR will host one of these CLOFU parties in my basement and I make this promise. Any nutjob that actually shows up to taste Clofu will only hear the click of a lock behind them which will the beginning of a long and difficult re-education process until they’re able to enter mainstream society, maybe years later.

A second stimulus bill to further bankrupt our grandchildren will be announced shortly, says House Speaker Nancy Pelosi because emptying our children’s pockets wasn’t enough. “We have to keep the door open to see how it goes,” Pelosi said.

Obama once again made it open season on embryos by funding the destruction of embryos for stem cell research. But Bill Clinton says it OK because the embryos aren’t fertilized. What!? File that under the dumbest thing said by a President not named Jimmy Carter.

It’s Pilot Season And George Lucas Has Begun Casting a Live-Action STAR WARS Series! According to MTV, the series will focus on the rise of the rebel alliance.

Can Lucas just leave it alone? What’s the deal with this guy? I mean, just leave it alone. It’s dead already. You killed it. Jar Jar desecrated it. Let it go, man. CMR will chip in and take care of what must be some huge gambling debts if you promise to stop. Now.

They say that right before natural disasters animals flee inexplicably. Well what kind of unnatural disaster would despair wildlife so much that they just give up and turn to the drink? I’m asking you. Just one note of caution, I wouldn’t serve that first deer anymore. He was falling all over the place. He’s had enough.