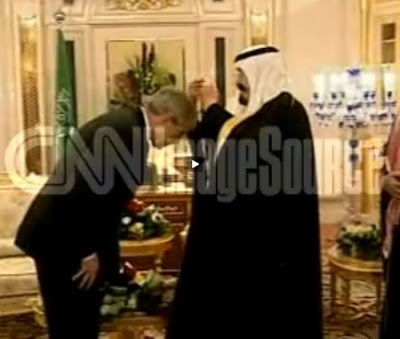 This really ticks me off. I really didn’t care all that much about the whole “scandal” about Obama bowing to the Saudi king. I think it mattered to those who are worried about the context of the bow in the midst of an unapologetic apology tour. But hey, I figured I’m not going to be too crazy about much that he does.

But what’s happening now is just so egregious.

Here’s the thing. Obama bowed to the Saudi king. It’s on video. It’s that simple. But now he’s denying it and the media’s playing along. When given the choice to believe their own eyes or THE ONE, they’re siding with Obama.

Clearly, Ben Smith of The Politico is clearly running damage control for the White House because he’s essentially saying the White House is saying Obama didn’t bow and that George W. Bush bowed too.

The question of whether President Barack Obama bowed to the Saudi king stirs some passions, as did the images of George W. Bush holding hands with the Saudi.

And while this White House is denying Obama bowed, there’s also video that appears to show Bush bowing to the king.

The Obama gesture, on the other hand, sure looks like a bow, and Captains Quarters points out that the two-handed handshake begins after Obama has come up from his dip.

And who cares? Well, the broader story of which this is an instance is the gap between warm presidential relations with Saudi Arabia, a helpful behind-the-scenes partner, and popular American suspicion of the country.

Now, please check out this short video below which Smith links to and tell me if this is Bush bowing to the King or bending over to have something placed around his neck. Here’s the picture being pushed around showing Bush bowing.

But go here for the video and see that Bush is simply ducking down while the Saudi king puts something around his neck.For Ben Smith to write “And while this White House is denying Obama bowed, there’s also video that appears to show Bush bowing to the king” is just so ludicrous that if Smith had any shred of integrity he would’ve hit delete on that the second he saw the video.

Now, despite what the media and the White House are saying here’s Obama clearly bowing to the king – which no matter what you see didn’t happen.

Now, how the heck is the White House saying he didn’t bow.

Now, honestly I don’t even care so much about the bow. But for the White House just to lie when everyone can see they’re lying and have the media join him in the lie is just offensive and, I believe, worrisome for the future.

America is not supposed to have state run media but that might be akin to what we have now.