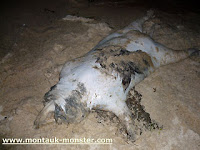 We here at CMR are convinced that eventually the robots will turn on us. When it happens, it will happen because of people like Rutgers University philosopher Peter Asaro.

Robots might be better at distinguishing civilians from combatants; or at choosing targets with lower risk of collateral damage, or understanding the implications of their actions. Or they might even be programmed with cultural or linguistic knowledge that is impractical to train every human soldier to understand.

Yes, they might be better at distinguishing civilians from combatants. That way they can be sure to target the biggest threats. It is a wonder that we have lived this long. Besides, who actually lists their job as philosopher? Dude should be suspect just for that.

══ 2 ══
The Complete Collapse of Standards

I think it was when the police tazed him after tear gassing him and sending in the dogs that I started feeling bad about laughing.

Remember the Montauk Monster. Well, they just found another one last week on Long Island. Once is an anomaly, folks. Two is an invasion.
Fox News:

It’s hard to dispute some family resemblances, even after death.

The new Montauk Monster, found on a Southold, N.Y., beach earlier this month, probably is closely related to last year’s edition, and was likely a stealthy, intelligent, night-ranging creature that may roam alarmingly close to human settlements.

The flesh of the new monster’s skull has mostly rotted off, but the beak-like snout, wide back teeth and large eye sockets indicate that it may be of the same species as the original monster, which startled beachgoers in the chic resort town of Montauk, N.Y., last summer.

My original thought was some kind of government genetically altered mutant but now I’m wondering if maybe it’s the harbinger of invasions from space. What? You don’t think there are space creatures that wouldn’t eat us if we gave them half a chance. Well, Mr. Smarty Pants, how do you explain this?!!!!!!!!!!!!!!!!!!!!

Great. Just what we needed. As if we didn’t have enough problems right here, scientists have discovered something’s roaring out in space. And us brilliant humans are trying to find it. Hey, scientists! When you hear a roar you back away slowly and ignore it. In movies, what happens to the guy who says, “Hmmm. That’s a curious noise coming from the basement. Let’s go check it out.” Well. What happens? Yeah. That guy ends up as a stain on the wall. Shut off the microphones boys. Pretend you didn’t hear it.Space.com reports:

Mystery Roar from Faraway Space Detected
Space is typically thought of as a very quiet place. But one team of astronomers has found a strange cosmic noise that booms six times louder than expected. The roar is from the distant cosmos. Nobody knows what causes it…

Our experience tells us that when something roars from outerspace, scream like a little girl for help. But in space, no one can hear you scream.

I Knew Gay Marriage Was A Slippery Slope!
══ 6 ══
Nothing says apocalypse like a possessed baby!

Who wants to play?

AP:Police continue a fruitless search for a man wearing an ape costume who has attempted to steal foam banana displays from inside local gas stations. Capt. Steve Klein said Thursday someone donning an ape costume entered two gas stations Wednesday trying to steal the displays and police have received several calls about the suspect hanging around town.While Klein acknowledges that the action may seem funny, they want to talk to the person behind the ape suit because they aren’t sure what the suspect’s motives are.

Duh. Maybe he’s hungry. I mean, what else would a fake ape eat but fake bananas?