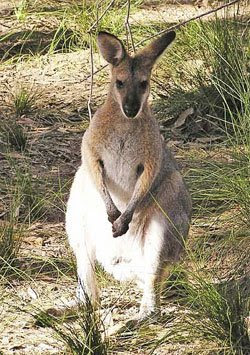 So all day long everyone has been talking about the death of Jacko and the cap and trade deal in Congress. But much more stunning news has flown in under everyone’s radar. And this is really important news.

For years, mysterious crop circles have been popping up in the poppy fields in Tasmania. I know you think it would be really weird if it were little green men in UFO’s, right? But trust me, the truth is even weirder.

The mystery of crop circles in poppy fields in Australia’s southern island state of Tasmania has been solved — stoned wallabies are eating the poppy heads and hopping around in circles.

“We have a problem with wallabies entering poppy fields, getting as high as a kite and going around in circles,” the state’s top lawmaker Lara Giddings told local media on Thursday.

“Then they crash. We see crop circles in the poppy industry from wallabies that are high,” she said…

Australia produces about 50 percent of the world’s raw material for morphine and related opiates.

I think this may also solve who’s been stealing all the Doritos and Pringles from local markets as well.

This, of course, doesn’t explain where the rest of the crop circles around the world are coming from but I suspect stoned humans.