I Obviously Couldn’t Be Prouder 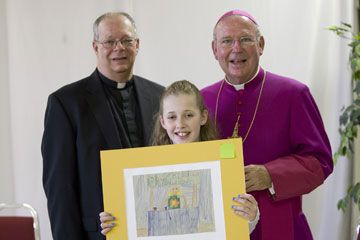 Yup. That’s my daughter’s picture in the Catholic Standard & Times receiving an award from our pastor Father Harry E. McCreedy and Bishop Joseph McFadden for the Year of St. Paul art contest at St. Paul Church in Norristown.

I couldn’t be more proud of my wonderful daughter who thinks she’s a big time celebrity now that she’s in the newspaper.

We’d been excited to all head to Church Sunday but about two hours before Mass I became so sick and told my wife I couldn’t go. I was so disappointed I wouldn’t be able to be there.

But my wonderful wife soldiered on, taking the kids by herself. It turned out that near the end of Mass, the seven year old had thrown up in the pew on her and even on the nine year old who told me later, “I don’t like veggie skillets so I didn’t even like watching her eat it the first time. And I certainly didn’t need it on my leg.”

So my wife mopped up what she could with her sweater, ran to the bathroom with the sick one while also carrying the baby and brought back paper towels to clean up the rest of the mess.

She rushed back, dropped the sick seven year old off, changed dresses, and rushed back out with the nine year old and the other children in order to get back in time for our nine year old to receive the award. And obviously she made it.

And you’d never know it from the picture but the nine year old was just a few hours away from getting sick as well.

So sorry about the icky story but I’m really proud of my daughter.

Thanks to the Catholic Standard and Times