Penn State May Be Full of Vampires 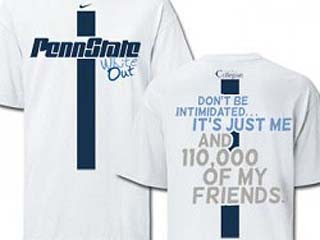 You know me. I’m not one to make outlandish accusations but I think Penn State University may be filled with vampires. And not the angsty teen kind like in “Twilight.” But the old school Bella Lugosi freak out at a crucifix kind. I don’t have a lot of scientific data to back up that claim but I’m still sayin’ it.

You want evidence? Ok. As a fairly normal human I want you to look at the shirt below. Just a quick look will do.

OK. You saw it. Are you reeling across the room in pain? Hissing? Turning into a winged rodent? Are you even offended by that shirt?

Look, I’m not telling people at Penn State what to do. I’m just saying that if I were there and someone refused to go near that shirt the first thing I’d be doing is looking for their reflection in a mirror or just super soaking them with holy water.

The shirts — intended to foster school spirit — sport a vertical blue line down the center with the words “Penn State White Out” emblazoned across the chest, forming a design that some say resembles a cross. The back of the shirt depicts the same blue line obscured by the words, “Don’t be intimated … It’s just me and 110,000 of my friends.” Roughly 30,000 of the shirts have been sold.

But alas Penn State says they received six complaints about the shirt. Six! Stop the presses. Burn the shirt!

But all complaints are not created equal. You see, the Anti-Defamation League’s Philadelphia branch, lodged a complaint as well. And now you’ve got a full-blown campus brouhaha.

I love this quote from an offended student in the story:

“At first glance, you don’t necessarily think that’s what it looks like, but when you look at it more, it does look like a cross,” Berns told Foxnews.com. “That’s the reason I didn’t purchase it.”

Translation? She wasn’t offended until someone told her that she was and then she quickly whipped up some huff. So in short, don’t waste the holy water on her. She’s just stupid and easily manipulated.

Showing that Penn State isn’t a barren wasteland of political correctness on parade, one student laughed that pretty soon people will be offended by lower case t’s. And kudos to the Penn State administration for not backing down either.

So in short, Penn State either has vampires on campus or just lots of idiots. Bet on idiots. But just keep a crucifix handy. That’ll tick ’em off either way.