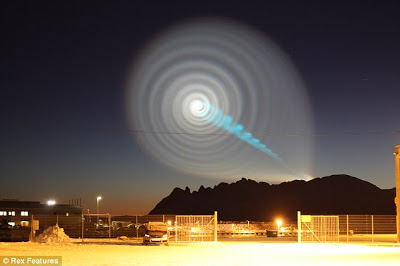 OK. I got some bad news. That picture you’re looking at is real.

Those strange lights were seen over Norway. And that’s bad news. I haven’t seen anything like that outside of sci-fi movies…evah! In sci-fi speak that’s a vortex or a gateway kinda thing. And to make matters worse it looks like the dropping off kind of vortex-ish-y thingy. And if I know anything about vortex-ish-y thingies on Earth it’s this – dropping off is bad.

I’m not one for predictions but I’m thinking tomorrow’s likely gonna’ be Sunny with a decent chance of INTERGALACTIC SPACE VILLAIN!!!!

In case you don’t believe the picture (as my wife doesn’t) here’s some video below. I’m really hoping that it’s no coincidence that Obama’s scheduled to go over to Norway today.