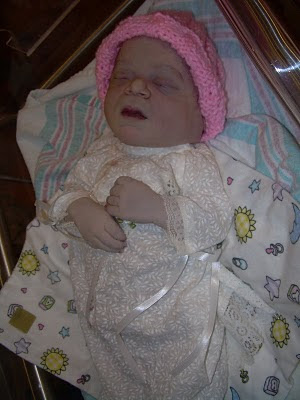 Rebecca had been on the fence for months over whether to abort her child as her boyfriend wanted her to. But through Jessica Chominski’s efforts and prayers, along with volunteers at the crisis pregnancy center, Rebecca made the brave decision to keep her baby. Unfortunately, Rebecca’s boyfriend upon learning that she’d chosen to keep the baby kicked her savagely and repeatedly in the stomach.

While treating her, doctors discovered fetal abnormalities in the 18-week-old fetus, including diseased kidneys and underdeveloped lungs resulting from a dearth of amniotic fluid. Despite being in a Catholic hospital, the doctor stunned them by saying that since the baby had no chance of living he recommended an abortion.

Jessica was stunned but managed to remind him that they were in a Catholic hospital but the doctor, according to Jessica, merely said that while he couldn’t do it there, Rebecca could come to his office in Abington where he could arrange it.

“’Utter frustration’, ‘Disappointing’, ‘Infuriating’” are still some of the only words Jessica can use to describe her feelings regarding the doctor’s suggestion in a Catholic hospital.

After months of working with the baby’s mother to help her choose life, the doctor at the Catholic hospital “kicked back all the work we’d done.”

“We were backtracked to where we’d been in June. I was devastated,” she said. “It just seemed that there was no safe harbor for this child. This poor little sheep had no shepherd.”

Jessica knew that if she hadn’t been sitting right there next to Rebecca, the pregnancy likely would’ve ended in an abortion. She said so many people seek out Catholic hospitals because “they believe that they’ll respect the dignity of the person. And when recommendations such as abortion come from a Catholic institution people accept it. There’s so much authority there.”

The hospital, according to news reports, insists that it follows the Ethical and Religious Directives for Catholic Health Care Services. The USCCB guidelines state that “First, Catholic health care ministry is rooted in a commitment to promote and defend human dignity; this is the foundation of its concern to respect the sacredness of every human life from the moment of conception until death.”

Further along it states that “employees of a Catholic health care institution must respect and uphold the religious mission of the institution.” That, of course, would preclude abortion but here’s how those rules seem to be gotten around.

Lester A. Ruppersberger, D.O., a pro-life gynecologist on staff at St. Mary’s, said a doctor at a Catholic hospital recommending abortion is hardly an anomaly. He said that Catholic hospitals cannot turn away doctors from renting space in their medical offices. He said that while doctors may not perform procedures like abortion in the hospital, administrators “draw a line” between where the hospital ends and the medical office building begins.

“They’ll say they can’t control the philosophy of the people who are renting from their medical office building, they can’t tell them what to do in their private practice,” he said. “You can have the world’s number one abortionist at a Catholic hospital. They can’t legally keep him off staff.”

So doctors affiliated with St. Mary’s actually dispense contraception and can have abortions performed in another building.

John Stanton of the Pro-Life Union of Southeastern Pennsylvania said, “The people who run the hospital make a point of saying that he’s not going to do it at the hospital. So somehow it becomes not an objective evil because it’s not done there? It’s wrong to kill a baby here but somewhere else it’s OK?”

Jessica brought Rebecca to a Catholic hospital because she believed that Catholic meant Catholic. “Sadly, we had to be the ones to respect the baby because they wouldn’t,” said Jessica. “This baby needed someone to fight for her. I wonder about all the countless other babies that we’re not there for.”

Jessica had worried that after what happened at St. Mary’s Hospital, Rebecca only needed the slightest push in order to abort so she accompanied Rebecca to almost all of her prenatal visits. She says they were all the same, even those at the Catholic hospital. “She’d leave these prenatal visits crying because these doctors would make her feel so guilty that she wasn’t going to kill her baby. I had to yell at some doctors. I feel really bad about it, but I had to.”

Rebecca went to four hospitals and all of them didn’t just recommend abortion. “They shoved it down her throat,” said Jessica.

It got so bad that Rebecca was often too frightened to ask questions herself for fear she’d be berated for not aborting her child. So Rebecca would give Jessica questions in the car for her to ask. Rebecca was hardly able to look up at the doctors.

When Rebecca was twenty weeks along she went to a secular hospital in Philadelphia. Jessica couldn’t make that visit, but Rebecca assured her it would be alright.

But it wasn’t. From the hospital, Rebecca called to tell Jessica the hospital was sending her to have labor induced. Rebecca had specifically told the medical staff that she didn’t want an abortion but they told her that she could deliver the baby then and would be allowed to hold her baby, giving what they called “comfort care,” and say goodbye.

“Your baby will not have a fighting chance,” explained Jessica. “Your baby couldn’t possibly survive right now.”

When Jessica hung up the phone she had no idea what would happen. Rebecca, still unsure, had her mind made up when the hospital asked her to sign autopsy papers for research purposes. “She was horrified,” said Jessica. “Autopsy papers?!”

Rebecca finally told the doctors that she wanted God to decide when this baby would be taken. Not her. Not the doctors. Nobody but God.

“I was so proud of her for that,” said Jessica. “That was such a beautiful moment.”

Just when it seemed that nobody could quite see a reason the baby should be born, Rebecca had found the strength to stand up for her baby. Rebecca was affirmed in her faith by a surprising source. She read a piece online by Father John Zuhlsdorf concerning the second miracle attributed to St. Gianna, about a mother with no amniotic fluid giving birth to a beautiful baby girl after doctors had recommended an abortion.

Rebecca became fascinated by St. Gianna and her amazing example of motherhood. At one point, Rebecca was even visited by members of the Society of St. Gianna who laid the glove of St. Gianna on Rebecca’s womb. “She was so touched by these people who didn’t even know her, affirming her, how they were praying for her, and their empathy,” said Jessica.

Rebecca began attending Mass again with her Mother, the experience moving her in her faith.

And shortly after, Rebecca even asked doctors for a “super-hydration” injection she’d read about in Fr. Z’s article to help the baby’s lungs. This woman who’d been too afraid to open her mouth in doctor’s offices weeks before was now demanding that everything be done to save her baby. Medical staff were surprised and wondered aloud how she even knew about the injection. They attempted to dissuade her but she insisted.

Rebecca was fighting for her baby.

Jessica got the call on January 9th that the baby was coming and she rushed to Abington hospital. Rebecca had asked Jessica to stay in the delivery room with her. Moments before the baby was born, Jessica pulled the doctor aside and told him ,“You promise her that you’re going to treat her baby like you’re treating your own daughter?”

When the baby was born, there were no cries from the baby. The child never even opened her eyes. Her little lungs struggled for each gasping breath. It was apparent to all that the baby wouldn’t live long.

The nurses handed the baby to Jessica. She looked at the beautiful baby in her arms and for a few moments she couldn’t be sad, not faced with the chubby cheeked miracle of life. She held the precious little life in her arms. “I took her over and she met her Mom and it was absolutely beautiful,” said Jessica. “The anesthesiologist was crying. Everyone was totally blown away. She lived for about an hour and a half.”

There wasn’t time to figure out if she had her mother’s hair or her grandmother’s nose. She had a soul that belonged to God that it seems just couldn’t stand being away from God for more than nine months and ninety minutes.

Rebecca, still on the surgical table and groggy from the pain medication, gaves Jessica a job. Make sure the baby is baptized. “That was my one mission,” said Jessica. “And it’s really the best mission.”

Jessica said, “I was like a pitbull in that delivery room. I told them they had to find a priest to come in there and they were so confused. When I said “priest”, the nurses must have heard “non-denominational clergy-person who believes in God” because in came this guy who thought he was baptizing the mother, and was extremely confused when I explained exactly how he needed to perform an infant baptism. I had called my friend, Fr. Kevin McGoldrick, on the way to the hospital and he had given me the correct formula for the baptism.”

The minister seemed confused but was willing to do what the Catholic Church called for.

Just as the baptism was to take place, a nurse ran out of the room and came back with a little white dress, booties, and a hat for the little baby’s baptism. “There wasn’t a dry eye there,” said Jessica.

The baby was baptized “Miracle Gianna.”

“It was an honor to be there. A witness of God’s mercy. And they all treated this baby like a person,” said Jessica. “And she died with Christ and as tragic as it was it, was the most beautiful thing we could’ve asked for. Now the baby’s in heaven.”

Baby Gianna had finally found her safe harbor. For so long Jessica had worried that this little lost sheep was without a shepherd, but that day little baby Gianna found her eternal home in the arms of Christ the Shepherd.

Baby Gianna had a mother who fought for her and a God who loved her. “As a parent it’s your job to get your child to heaven,” said Jessica. “That is what parenthood is supposed to be. And she did it.”

After the funeral, Jessica asked Rebecca if it was all worth it. Rebecca looked her friend in the eye and told her, “I know I did the right thing. I would do it all over again.”

Nine months and ninety minutes changed everything for so many. Jessica said, “This baby moved mountains. Brought me closer to God. Brought her mother closer to God.”

And little Gianna’s life may have had more of an impact than anyone in that room that day could’ve realized.

The Philadelphia Bulletin ran a story concerning Doctor Stephen Smith’s recommendation of an abortion at St. Mary’s, a Catholic hospital. That article has begun a firestorm of criticism.

John Stanton, Public Affairs of the Pro-Life Union of Southeastern Pennsylvania said, “This one burned. This isn’t going away,” he said. “This baby’s creation and death is not going to go away. Some good will come of this. I can tell you that.”

Note: This is the second part in a week-long series telling this incredible and gut-wrenching true story about life, death, abortion, and betrayal. We ask all of our readers and blogging friends to help us in any way they can to share this story. Please stay with us this entire week.