Now Pictures of Babies are Offensive Too? 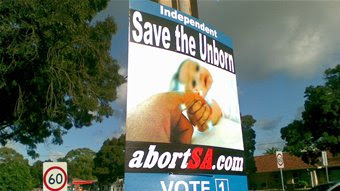 ABC in Australia is reporting on a political race where one candidate is making abortion a key part of his Independent candidacy. That, of course, has rankled his opponents.

The Democrats candidate Jeanie Walker, according to ABC:

“says anti-abortion posters put up around Adelaide by an independent candidate are offensive.

She says they increase the stigma on women who need help and on doctors who perform abortions. “Women don’t just lightly go in and decide to terminate a pregnancy,” she said.

“There’s a multitude of reasons why they may do that so we need to sort of keep this out of the political arena.

“They shouldn’t be on poles everywhere for people to see. So if he wants to debate this, it needs to be done sensitively.”

Here’s a shot of the “offensive” poster.

Doesn’t seem too offensive, does it? But wait. Here’s the best part. Ready for the best line ever in a news article. A different ABC article by the same network says (and I’m not making this up):

The anti-abortion campaign posters feature photos of babies, which many female voters have found offensive.

I know pro-choicers didn’t like real babies. I had no idea they didn’t even like pictures of babies.

This is just another example of pro-choicers wanting to make even the pro-life argument “controversial” and “offensive” in order to silence us. Because they know that the more people know about abortion the more pro-life they’ll become.