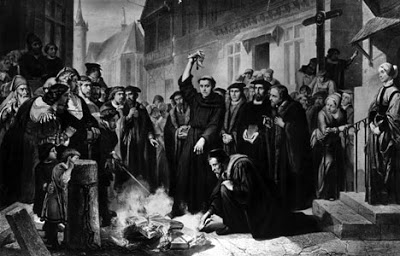 Taylor Marshall, a Catholic convert, is one of our favorite bloggers. We’ve asked him to write a few guest posts for us this month and he kindly agreed. He’s a lot smarter than us so be prepared for some high falutin poly syllabic words. And check out his blog as well.

A Protestant reader of Canterbury Tales recently asked why Catholics believe that tolerating heresy is “noble,” and also wondered why the Catholic Church condemned the Protestant Reformers who sought to bring about reform. The reader writes:

So heretical teaching within the Catholic Church should be kept unchecked because that would more noble? Or does that only apply to Protestants?

At root, this question seeks to draw out the difference between “Protestant Reform” and “Catholic Reform.” This is a good question and worthy of a lengthy response. Here’s my meager attempt at it:

We cannot fight heresy by creating new heresies. For example, in many regards the Monophysite heresy (i.e. “Christ has one nature”) was an over-reaction to the Nestorian heresy (i.e. “Christ is two persons”). The Catholic Church has always sought to aim directly at the truth, and not merely at the destruction of error. Too often the refutation of error crosses over into further error.

Similarly, Luther and Calvin sought to displace misunderstandings about grace and merit (i.e. the faulty nominalism spawned by William of Ockham) by creating an alternate vision of grace and merit (which ironically embraced Ockham’s nominalism and repackaged it). Luther’s “solution” was in fact heretical. A quick fix is often faulty. Duct tape can “fix” almost anything – but it eventually gives way to other problems.

The annals of Church history are filled with Catholic Reformers: Paul, Athanasius, John Chrysostom, Maximus, John Damascene, Pope Gregory VII, Francis, Dominic, Catherine of Sienna, Ignatius, Teresa of Avila, et al. Each of these Catholic Reformers retained the unity of Christ’s Church, submitted to church leadership, and patiently brought about renewal. In many cases, each experienced active persecution from other Christians and even fell under the suspicion of heresy. However, their humility and silence eventually vindicated their cause as advocates for the evangelical truth of Christ’s doctrine.

Saint Francis of Assisi is perhaps one of the best examples of patience in the cause of reform. When St Francis went to Rome to seek recognition from the Pope, the Pope dismissed him impatiently and told him to go “lie down with the pigs.”

After a little while, Francis returned smeared with swine feces and stinking to high heaven. When the Pope objected, Francis answered, “I obeyed your words and merely did as you said. I lay down with the pigs.” Suddenly the Pope realized that this was a holy man who was willing to obey even in the face of humiliation. The Pope listened to Francis’ vision for renewal and the rest is history.

When rebuffed by the pope, Saint Francis could have appealed to Sacred Scripture, showing this his pattern of life was poor and lowly like that of Christ. He might even have contrasted his own “biblical life” against the extravagance of the Papal court. Francis may even have rightly rebuked the abbots, bishops, and cardinals for lacking evangelical witness. Instead, Francis followed the path of Christ. He allowed himself to be misunderstood and maligned, knowing that God would bring about his vindication…and God always does.

Contrast Saint Francis to Martin Luther. Luther did not visit Rome for confirmation of his cause, nor did he respect the structures of the Church. In fact, Cardinal Cajetan met privately with Luther and explained how Luther might modify his message so that Cajetan could have it approved by the Roman Curia. If Luther had moved more slowly and charitably, he may have become “Saint” Martin Luther.

Unfortunately, Luther was adamant and stiff-necked. He would not attempt compromise. If the Pope would not agree with him, then he would reject the papacy. Period. Luther would not tolerate any authority that failed to support him immediately and without question. Consequently, when the papal bull arrived, Luther burned it publicly and began to curse the pope as Antichrist.

Note the difference between Francis and Luther. The former moved slowly and humbly. The latter acted independently and rashly. Consequently, the history of Protestantism is marked by rash and hasty division – there are now 36,000 Protestant denominations.

As the Apostle James wrote: “the anger of man does not work the righteousness of God” (Jas 1:20). History shows that God does not use “hot-heads” to guide His Church into righteousness. God chooses those who are little, meek, and humble – for such is the kingdom of Heaven.